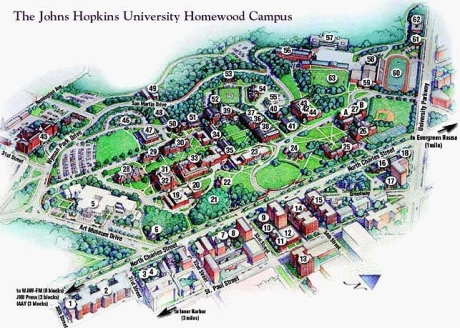 The campus is approximately 20 miles from the BWI Airport and 2 miles from the train station. Transportation to and from the dormitory facilities is available through the BWI Shuttle Service and Taxi Service.  From Penn Station you can catch the Hopkins shuttle bus which will take you to the Homewood or medical campuses.  There is no charge to take the shuttle. The Charles Commons dormitory is at the corner of 33rd and Charles Street.

From I-95 (northbound): Exit at I-395, then take the exit to Martin Luther King Jr. Blvd. Take King Boulevard until it ends at Howard Street (remain in one of the middle lanes of King Boulevard to avoid a premature forced right or left turn) and proceed about 2 miles. At 28th Street, take a right. Take a left on Charles St. and continue to 3301 N. Charles St.