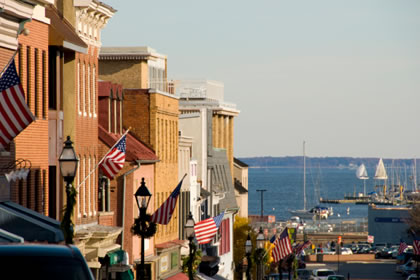 Baltimore, fondly known as Charm City, is one of the East Coast's most endearing cities.

Found in the Mid-Atlantic region of North America, Baltimore is less than 50 miles from Washington, DC, and within easy reach of Philadelphia and New York.

It is a city of neighborhoods, with more than 700 communities, many with a strong ethnic heritage.  A major renovation of the downtown and waterfront areas led to the creation of the Harborplace in the Inner Harbor, where one finds the renowned National Aquarium, the Maryland Science Center and the new renovated Power Plant with the Hard Rock Cafe and the ESPN Zone.  Sports fans have a choice of the Baltimore Orioles at Camden Yards, the Baltimore Ravens at Ravens Stadium, or the Preakness at Pimlico.