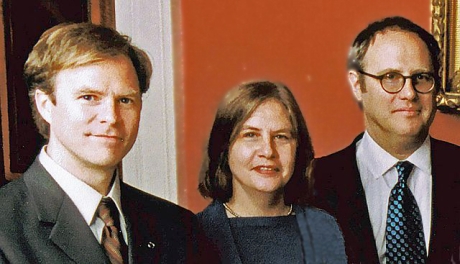 Douglas Henderson has a PhD in Music Composition from Princeton. He lives in Berlin, Germany, where he is a sound artist. He is represented by a gallery for which he recently curated an exhibition featuring female sound artists.

Leigh Henderson has a PhD in Epidemiology and lives in Baltimore. She retired from management of a national behavioral health data collection system. She has been working with DA on an online research archive for the Smallpox Eradication Program.

David Henderson earned an MFA at Columbia. He is a sculptor and part-owner of a custom metal fabrication business. He and his wife, Kate Teale, a painter and professor at the Pratt Institute, live in Brooklyn Heights, N.Y.

Joel G. Breman, M.D., D.T.P.H., F.I.D.S.A., F.A.S.T.M.H.
Dr. Breman was deputy chief of the Smallpox Eradication Unit, World Health Organization from 1977 - 1980. Prior to this, he was Chief of the Epidemiology Section for the Organisation de Coordination et de Coopération pour la lutte contre le Grandes Endémies (OCCGE) and the CDC principal advisor to the Guinean Smallpox Eradication-Measles Control Program from 1967-1969. He is the recipient of the Officer of the Leopard National Order, the highest award bestowed by the Democratic Republic of Congo.

Anthony S. Fauci, MD
Anthony S. Fauci, M.D., is director of the National Institute of Allergy and Infectious Diseases (NIAID) at the U.S. National Institutes of Health. He serves as one of the key advisors to the White House and Department of Health and Human Services on global AIDS issues and was one of the principal architects of the President’s Emergency Plan for AIDS Relief (PEPFAR). Dr. Fauci is also the long-time chief of the NIAID Laboratory of Immunoregulation and a member of the US National Academy of Sciences. His awards include the National Medal of Science, the Robert Koch Medal, the Mary Woodard Lasker Award for Public Service and the Presidential Medal of Freedom.

Julie Louise Gerberding, M.D., M.P.H.
Dr. Julie Gerberding is Executive Vice President and Chief Patient Officer, Strategic Communications, Global Public Policy, and Population Health at Merck & Co., Inc. In 1998, Dr. Gerberding led the U.S. Centers for Disease Control and Prevention (CDC) Division of Healthcare Quality Promotion and then served as CDC director from 2002 to 2009. She has received more than 50 awards and honors, including the U.S. Department of Health and Human Services (DHHS) Distinguished Service Award for her leadership in responses to anthrax bioterrorism and the September 11, 2001 attacks.

Tom Inglesby, MD
Tom Inglesby is director of the UPMC Center for Health Security and an associate professor at the University of Pittsburgh Schools of Medicine and Public Health. He is on the Advisory Committee to the Biomedical Advanced Research and Development Authority (BARDA) in the Office of the Assistant Secretary of Preparedness and Response of the Department of Health and Human Services. He has also served on committees of the Defense Science Board and the National Academies of Sciences and in an advisory capacity to DHHS and DARPA. Dr. Inglesby completed his internal medicine and infectious diseases training at Johns Hopkins University School of Medicine, where he also served as Assistant Chief of Service in 1996-97.

Tommy G. Thompson
Tommy G. Thompson is a former U.S. Health and Human Services (HHS) Secretary and four-term Governor of Wisconsin. As HHS Secretary from 2001 to 2005, Governor Thompson was one of the nation's leading advocates for the health and welfare of all Americans. Thompson has received numerous awards for public service including the Anti-Defamation League’s Distinguished Public Service Award, the Friend of Zion Award In 1997, Governing Magazine's Public Official of the Year Award, and the Horatio Alger Award in 1998.

Tara O’Toole, MD, MPH
Tara O’Toole is Executive Vice President of In-Q-Tel (IQT) and Director of IQT’s BiologyNext Lab. She served as Director of the Center for Civilian Biodefense Studies at the Johns Hopkins Bloomberg School of Public Health. From 1989-93, she was a senior analyst at the Congressional Office of Technology Assessment. From 1994-98, Dr. O’Toole served in President Clinton’s administration as Assistant Secretary for Environment Safety and Health in the Department of Energy, and from 2009-2013, Dr. O’Toole served as Under Secretary of Science and Technology at the Department of Homeland Security.