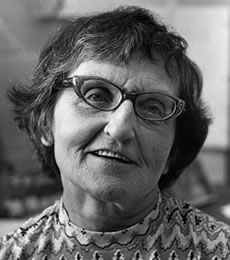 Legend has it that you can parachute anywhere in the world and be within 50 miles of a Helen Abbey student.

Her influence on generations of scientists was pervasive by virtue of her joint appointments in biostatistics, epidemiology and population dynamics. She also was a professor of medicine at the School of Medicine. Dr. Abbey's research examined the design and analysis of biomedical studies and the analysis of genetic and other familial components in human and mammalian disease.

Dr. Abbey's work focused on the effects of low-level radiation on disease and mortality and the natural history of enteric infections in an American Indian population. She also has worked on factors in childhood asthma, diabetes and familial factors associated with length of life.

Often gathering students in her cramped third floor office, Dr. abbey was the quintessential teacher. She received the School's first "Golden Apple Award" in 1971 for excellence in teaching and was awarded it two additional times. Helen Abbey died in 2001 at the age of 85.