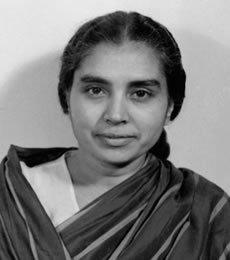 Sushila Nayar was a central figure in the development of health care programs and educational institutes in India for more than 40 years. During her service as minister of health, many fundamental health programs were begun, including treatment and control of malaria, venereal disease, tuberculosis, and leprosy.

Dr. Nayar also was active in the establishment of emergency medical services in New Delhi.

She was the founder and director of the Mahatma Gandhi Institute of Medical Sciences, which takes medical training to rural areas and also was president of the Kasturba Health Society.

In 1988, Dr. Nayar was elected to the University's Society of Scholars.