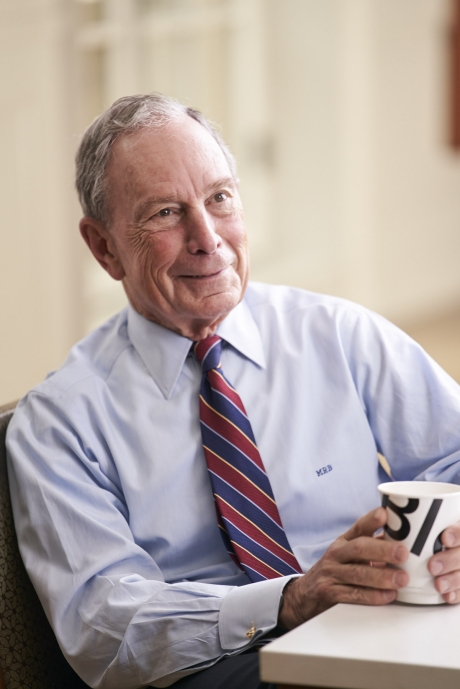 Michael R. Bloomberg is an entrepreneur and three-term mayor of New York City whose innovations in government and philanthropy have put him at the forefront of public health, education, climate change, and other critical global issues. The founder of Bloomberg LP and Bloomberg Philanthropies, Bloomberg serves as World Health Organization Global Ambassador for Noncommunicable Diseases and Injuries, and the United Nations Secretary-General’s Special Envoy for Climate Ambition and Solutions.

A 1991 dinner hosted by Johns Hopkins University President William Richardson proved to be a key turning point for Bloomberg’s commitment to public health and philanthropy. Bloomberg, a 1964 electrical engineering graduate, joined the Board of Trustees in 1987. Al Sommer, dean of what was then the Johns Hopkins School of Hygiene and Public Health, arrived early and seated himself next to Bloomberg.  Sommer described the School’s work to fight disease and prevent mortality worldwide, Then Bloomberg spoke up. ”The medical school saves one life at a time,” he said to Sommer, “but public health is out there saving lives, millions at a time!”

The rest is history: The school’s tagline was born, and Bloomberg became a public health champion.

As mayor of New York City from 2002 to 2013, Bloomberg made public health a top priority. He implemented ambitious public health programs, including the first indoor smoking ban adopted by a large city, which then became a model for the nation and the world. During Bloomberg’s tenure, thanks to many of these public health measures, New Yorkers’ life expectancy increased by three years – 2.2 years longer than the national average over that time span.

Bloomberg has given away $11.1 billion over his lifetime. Addressing public health challenges is one of Bloomberg Philanthropies’ five main focus areas, and Bloomberg School faculty have helped shape his investments to save and improve lives around the world. He has invested more than $1 billion in global tobacco control efforts since 2007, saving an estimated 35 million lives; provided technical assistance to improve health data systems with more than 30 national governments; worked to reduce rates of obesity and drowning; supported polio and malaria eradication; launched a $50 million initiative to fight the U.S. opioid crisis; developed a $250 million initiative to help governments around the world implement healthier food policies; and committed more than $500 million to reduce road traffic fatalities and injuries in low-and middle-income countries.

Gives his first donation of $5 to Johns Hopkins University the year after his graduation. Grateful for the scholarship he had received to earn a bachelor of science in electrical engineering, he would later repay his alma mater many times over.

Founds Bloomberg LP and invents the Bloomberg Terminal, which launches him as a pioneer in business and financial information technology. He founds Bloomberg News in 1990.

Sommer and Bloomberg embark on ambitious plans that eventually double the size of the School of Hygiene and Public Health's physical plant and dramatically increase support for research and scholarships.

Bloomberg is elected chair of the Johns Hopkins University Board of Trustees. During Bloomberg's five-year tenure, Johns Hopkins's endowment doubles to $1.8 billion.

In honor of Bloomberg's substantial contributions to the School of Hygiene and Public Health and Johns Hopkins University, the school is renamed the Bloomberg School of Public Health.

With support from Bloomberg Philanthropies, the Bloomberg School enrolls its first class of Sommer Scholars, named in honor of Dean Emeritus Al Sommer. The Scholars receive full tuition and a stipend, and they travel to New York to meet Mike and see public health in action at Bloomberg Philanthropies and around the city. Since then, more than 300 Sommer Scholars have joined a global network of leaders determined to shape the future of public health.

Bloomberg launches the Bloomberg Initiative to Reduce Tobacco Use. The initiative has invested $1 billion to support tobacco control in more than 110 countries, with an estimated 35 million lives saved worldwide.

Bloomberg Philanthropies launches the Initiative for Global Road Safety. The initiative has committed more than $500 million in 30 cities and 15 countries, and its work has helped save nearly 312,000 lives through strengthened legislation, increased enforcement, and improvements to dangerous roads. Roughly 3.3 billion people are now covered by life-saving road safety policies since the program's inception.

With a $300 million gift in honor of the Bloomberg School's Centennial, the largest in the School's history, Bloomberg launches the Bloomberg American Health Initiative to tackle declining life expectancy in the U.S. The initiative focuses on five major challenges: addiction and overdose, adolescent health, environmental challenges, obesity and the food system, and violence. 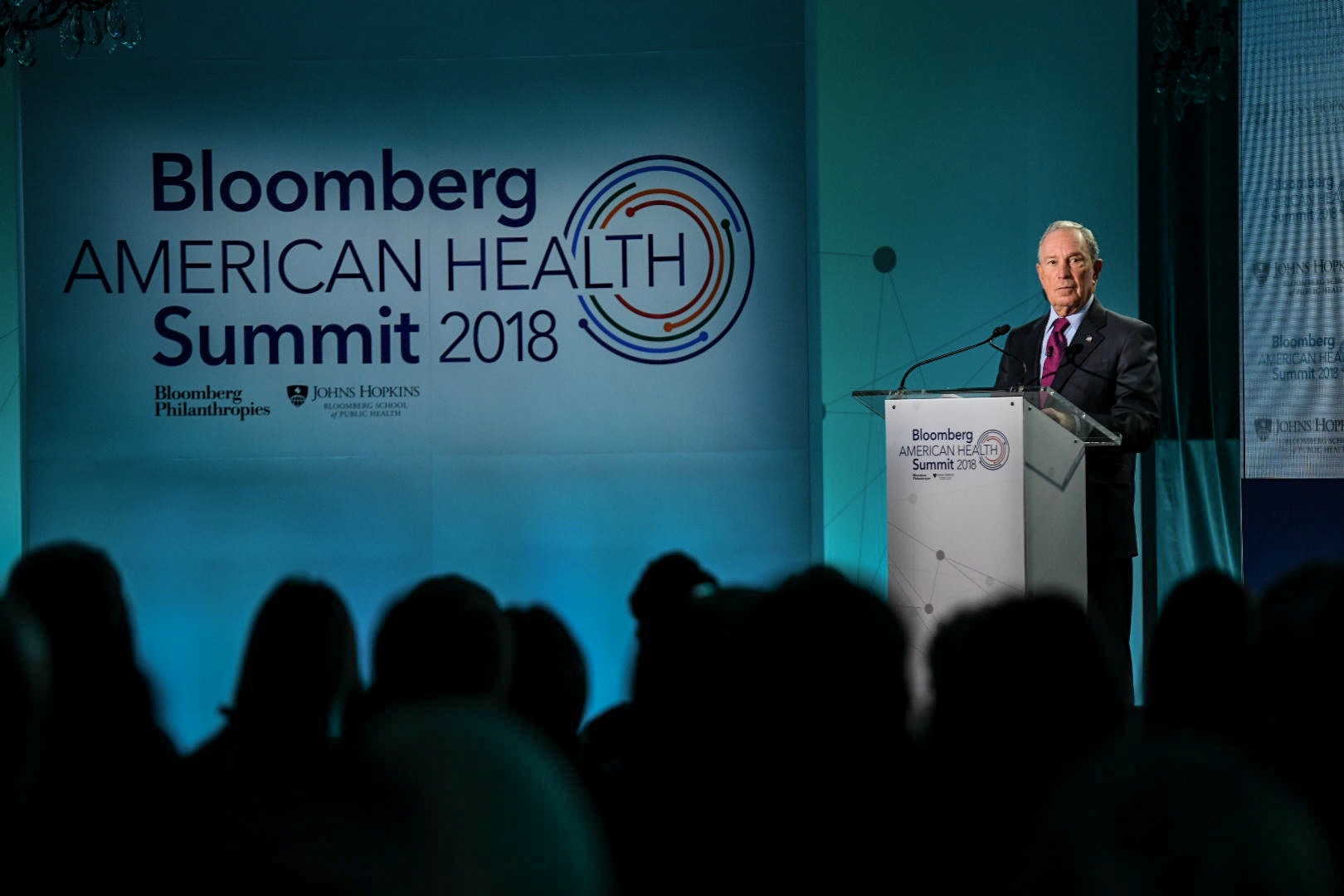 Appointed WHO Global Ambassador for Noncommunicable Diseases and Injuries, Bloomberg advocates for a concerted global effort against noncommunicable diseases, which cause 67% of deaths in low- and middle-income countries but account for only about 1% of the foreign aid for health care.

Bloomberg starts the Partnership for Healthy Cities, committing over $20 million to support local governments in developing policies to prevent noncommunicable diseases and road injuries. Membership includes more than 70 cities and over 300 million people.

Bloomberg donates $1.8 billion to support undergraduate student financial aid – the largest gift in the history of American higher education. The gift allows admissions at Johns Hopkins to become permanently “need blind,” accepting applicants without regard to their ability to pay.

Bloomberg Philanthropies, in partnership with Campaign for Tobacco-Free Kids, launches a campaign called “Protect Kids: Fight Flavored E-Cigarettes” that aims to reduce youth e-cigarette use through flavor bans and other effective policies in U.S. cities and states.

Amid the coronavirus pandemic, Bloomberg Philanthropies launches a series of emergency response efforts, including:

Bloomberg Philanthropies and Johns Hopkins University announce the Vivien Thomas Scholars Initiative, a $150 million effort to address historic underrepresentation in science, technology, engineering, and math (STEM). The initiative creates new pathways and funding for students from Historically Black Colleges and Universities and Minority Serving Institutions to pursue and earn PhDs in these fields at Johns Hopkins.