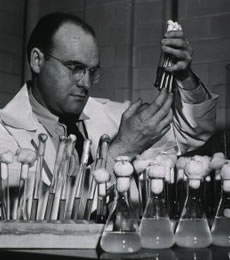 The Coxiella burnetti genus of microorganisms, the causative agent of Q fever, bears the name of Herald R. Cox.

After graduation from the School, Dr. Cox worked for the U.S. Public Health Service in Montana to study rickettsia, a group of organisms that causes Rocky Mountain spotted fever and typhus. Growing sufficient rickettsia for his research was nearly impossible because the organisms were known to thrive only in lice. Dr. Cox discovered that they could also be grown in fertile egg membranes, leading to the development of vaccines to combat the viral agents responsible for typhus.

In 1942, he joined the staff of Lederle Laboratories as director of viral research. During his 26 years with the company, he also helped develop live polio vaccine. Prior to his retirement in 1972, Dr. Cox was director of cancer research at Roswell Park Memorial Institute, concentrating his efforts on cancer immunology.