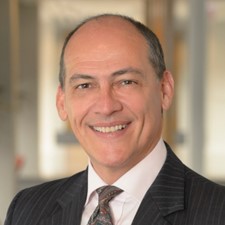 Lauded as a trailblazer, Rodrigo A. Sierra is chief communications officer and senior vice president of the American Medical Association (AMA) where he serves on the executive management team and as advisor to the CEO in leading a transformation of the 170-year-old organization to markedly enhance its leadership in shaping the evolving healthcare system for the nation. The brand repositioning, media and public affairs expert is responsible at the AMA for public relations, enterprise communications, executive leadership positioning and enterprise social responsibility. He also serves as executive sponsor of the AMA’s Latinx employee resource group and senior management liaison to the AMA Foundation.

Over a distinctive and award-winning career, Sierra has been instrumental in achieving meaningful results in high-profile corporate, media, non-profit, government and regulatory positions. He has a proven record of developing innovative solutions for individuals, companies, governments and non-profits in challenging marketplace circumstances.

Sierra’s brand and crisis management expertise and experience in strategy, policy and organizational change have equipped him to create and implement proactive initiatives that effect positive change as well as social impact for both individuals and organizations. Sierra leveraged these skills to inform his strategic thinking and planning throughout the COVID-19 pandemic in confronting an attack on science and positioning the AMA as the trusted source for evidence-based information. Likewise, he led the reimagination of the AMA’s internal communications function that enabled the organization to succeed virtually in the midst of emerging as an essential national force during the pandemic.

Sierra led the transformation, in 2017, of the AMA’s website, social media platforms and intranet site, each of which has garnered numerous awards for their design and audience effectiveness. During his tenure, he has led his team in growing media exposure year-over-year resulting in greater share of voice, enhanced brand sentiment and contributed to ten consecutive years of membership growth.

In 2011, Sierra was recruited by the Chief Executive Officer of Johnson Publishing Company (JPC) to join the executive leadership team charged with turning around a 65-year-old company on the brink of demise. In his role as Chief Marketing Officer, Sierra quickly and effectively repositioned the company’s corporate image through a cross-platform strategy that included branding, marketing, digital & social media, public relations, and advertising. He immediately restructured the company’s communications and media strategy to ensure internal alignment with corporate business plans and external knowledge of the company’s endeavor to rebuild the storied brands of JPC. Within 8 months, Sierra’s leadership resulted in an increase of more than 400% in social media metrics and garnered earned media coverage valued at well over $2 million. He guided the redesign of the corporate website and intranet site and creation of a new corporate logo. Sierra secured national marketing partnerships with Macy’s and Sony Pictures and led the teams that developed consumer driven programs for both initiatives. He created the marketing and public relations strategy for the relaunch of the company’s flagship publication, EBONY.

During Sierra’s eight year tenure with Integrys Energy Group and its predecessor, Peoples Gas, he drew upon his command of communications and public affairs expertise to twice reposition the company. He was recruited in l998 as a key member of the core team to brand what was then a 150-year-old staid public utility (Peoples Gas) to Peoples Energy, a strategic consumer-centric energy company, and then served as the new company’s Manager of Public Relations. Later, as the company’s Vice President of Corporate Communications, Sierra applied his proficiency in circumstances requiring sensitivities to multiple audiences, political acumen and a high-profile presence, to manage initiatives with significant impact on the new brand including: a major corporate restructuring to reposition the company as performance driven, a controversial and highly sensitive regulatory settlement, the company’s first delivery rate increase in 13 years and a variety of crisis communications challenges. Among the latter was a breakthrough program with the City of Chicago to target slum landlords that assuaged activist anger and transformed consumer advocates into company allies.

Sierra’s leadership in brand strategy, policy and organizational issues informed his bold initiative to “re-invent” energy assistance in Illinois by conducting statewide town hall meetings to build consensus to improve the system. Results included creation of the first program to end the cycle of disconnection, maintenance of year-round energy service to low income customers and increased revenues of $14 million resulting from payment assistance grants to customers of the utility. Internally, he strategically leveraged the 150th anniversary of the corporation as a cornerstone to restore employee confidence following a period of significant financial pressure and intense public scrutiny.

In the company’s second repositioning, Sierra played a pivotal role in ensuring the $1.5 billion Integrys merger was received positively by institutional investors and individual shareholders. He then served as vice president of Public Affairs for the $7 billion Integrys Energy Group, where he managed communications, government, community and contributions professionals in shaping meaningful stakeholder relationships that helped the company meet corporate goals across the newly formed entity serving 2.2 million customers in four states.

Sierra has a demonstrated ability to transition between public and private sectors, which has been a key element in his success in building the type of mutually beneficial partnerships that leverage both resources and brand equity.

From 2000 to 2002 he served in the cabinet of Chicago Mayor Richard M. Daley as deputy mayoral press secretary. He effectively repositioned the day-to-day strategy and operations of the Mayor’s Press Office and 48 city departments to create greater synergy that led to improved news coverage opportunities. He was an integral member of the team that helped to win relocation of the global headquarters of Boeing Corporation to Chicago.

Sierra spent 15 years in the media in a variety of positions he created out of initial opportunities. His journalism work has been recognized with awards from United Press International, the Society of Professional Journalists and the National Association of Hispanic Journalists.

From 1990 to 1998 Sierra served at WGN Radio as a reporter, anchor and assignment editor. He won the position based upon his performance as the first person to report from the major breaking news story of the gun turret explosion aboard the U.S.S. Iowa that killed 47 sailors at Roosevelt Roads Naval Training Base in Puerto Rico. He launched the station’s first public affairs program on Latino issues.

Sierra began his communications career by leveraging a part-time, temporary position with ABC News, New York into a management role by creating the department of Affiliate News Services. In that role, he launched the radio networks first efforts to provide added value to radio stations nationwide.

Sierra has demonstrated his commitment to community with an interest in diversity and urban challenges. Chicago Mayor Rahm Emanuel appointed him to the Chicago Board of Education with a mandate to overhaul the public school system with an annual operating budget of $5.2 billion and ensure the 400,000 students it serves graduate college and career ready. He also served on the Chicago Teachers Pension Fund board with fiduciary responsibilities for a $10.4 billion fund. Mayor Emanuel subsequently named Sierra as vice chairman to the Chicago Housing Authority (CHA) where he helped to lead a bold strategic initiative − Plan Forward - to sustain strong neighborhoods and prepare CHA residents for the global economy on their road toward self-sufficiency. Sierra chaired the board of the CHA’s $100-million retirement plan and trust.

Sierra’s concern for Latino issues resulted in his position as a founder and steering committee member of Nuestro Futuro, a partnership with the Chicago Community Trust. He serves on the board of Leadership Greater Chicago and has served on the board of the Puerto Rican Arts Alliance and on the executive committee of the Goodman Theater board. He is on the CMO Council North America Advisory Board, comprised of prominent marketing executives and thought leaders from a diverse range of industries and globally-known brands. He is a member of the CMO Club, Page Society, Economic Club of Chicago, Executives’ Club of Chicago, Publicity Club of Chicago and City Club of Chicago.

In 2015, Chicago United named Sierra a Business Leader of Color who is an, “exceptional minority professional who demonstrates superior business acumen and drives global competitiveness.” In 2013, Hispanic Executive magazine named Sierra one of the top 10 executive leaders in the nation.

Sierra earned an MBA from the Kellogg School of Management through the Executive Master of Business Administration program in June 2008. He holds a bachelor’s degree in philosophy from Northwestern University.