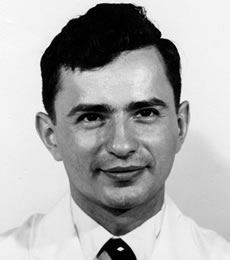 Bernard Roizman has been a leader in herpes virus research for more than 20 years. His work has focused on herpes simplex, the virus that causes cold sores and genital herpes infections in humans. Research in his laboratory has led to an understanding of the biology of the viruses at a molecular level and of their ability to cause disease.

Dr. Roizman's early work identified a number of viral genes and proteins, determined the structure of viral DNA, and defined the basic principles of herpes simplex virus gene regulation. He extended his work by studying the molecular mechanisms by which the virus regulates expression of its genes. His laboratory also conducted extensive investigation into the identification of viral genes and the functions of specific viral proteins. As a result, many of his techniques of genetic engineering are applied in labs today.

In his later years, Dr. Roizman studied the mechanisms by which the viruses cause disease. These studies have identified a number of genes that the virus needs in order to grow in nerve cells, as well as proteins that allow the virus to enter or exit from other types of cells. This research led to the construction of a genetically engineered herpes simplex virus vaccine.

Dr. Roizman was chairman of the Department of Molecular Genetics and Cell Biology at the University of Chicago from 1985-88. His educational efforts include editorial positions with 13 journals and membership on numerous international and national boards and committees.