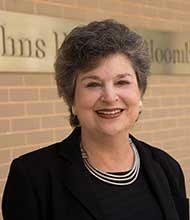 Margaret Conn Himelfarb, an editor and medical research advocate, has a B.A. from the University of Pennsylvania and an M.P.H. from the Johns Hopkins Bloomberg School of Public Health. She is a member of the JHSPH Health Advisory Board and has served on the School's Institutional Review Board for a decade. She also serves on advisory committees for the Center for Refugee and Disaster Response and the Center for Public Health and Human Rights. Margaret also led the School's Centennial Celebration by serving as the chair of the Health Advisory Board's Centennial Celebration planning committee.

Ms. Himelfarb is also a member of the Johns Hopkins School of Medicine Institutional Stem Cell Research Oversight Committee (ISCRO), and was recently re-appointed by the Governor to the Maryland Stem Cell Research Commission. As immediate past Chair of the Commission, she increased collaborations between public and private entities and leveraged funds by establishing interstate research partnerships.

Ms. Himelfarb is a founder, past chair, and the first Honorary Lifetime Board Member of the Maryland Chapter of the Juvenile Diabetes Research Foundation (JDRF). Her leadership helped the Chapter transition from a small group of concerned families to a major, statewide organization, raising millions of dollars for diabetes research. She also served on the JDRF International Board of Directors, and currently sits on its International Board of Chancellors.

Ms. Himelfarb reviewed research grants for JDRF for many years, testified before the FDA on diabetes related matters, and served on various advisory committees for the National Institutes of Health. Her advocacy efforts include spearheading a successful national campaign for a Diabetes Awareness U.S. Postage Stamp and leading a State-wide grassroots coalition to help secure the legislation that authorizes Maryland to fund human stem cell research.

Ms. Himelfarb has received several humanitarian awards for raising public awareness about diabetes and support for medical research. She was also honored at the 2009 World Stem Cell Summit for her efforts to advance stem cell research. In 2010, she received the Johns Hopkins University Heritage Award, and, in 2012, The Daily Record named her one of Maryland's Top 100 Women.