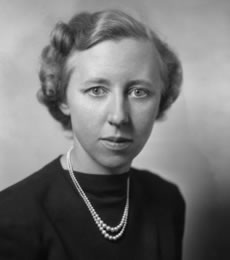 The School was the nexus for the career of the strong-willed Baltimore native who was known for her independence, enthusiasm and foresight. Anna Baetjer originally researched the role of calcium and potassium on cardiac and skeletal muscle. However, the Department of Physiological Hygiene, to which she was appointed as soon as she received her doctorate, was committed to the study of the effects of the environment during the 1930's.

At the same time, the field of occupational health was increasingly popular. As a result, Dr. Baetjer focused on the role of silica, coal and other dusts on respiratory infections; the effects of environmental temperature on susceptibility to toxic chemicals; and the relationship between cancer and industries that use chromium in their manufacturing processes. She was among the first scientists to identify the relationship between occupation and lung cancer, which made her a valuable consultant for the private sector and groups like the World Health Organization.

Dr. Baetjer established Hopkins' research and training program in environmental toxicology, one of the nation's first. It preceded by several years the federal government's recognition of the impact of the environment of health with the establishment of the National Institute of Environmental Health Sciences.