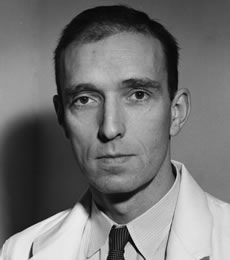 From observation to application, Frederik Bang's research was hallmarked by translating the microscopic to macroscopic. Dr. Bang was an extraordinarily creative scientist whose interests ranged from electron microscopy to animal ecology.

He believed that the study of "transparent" animals, in which circulation could be observed in the intact animal, would lead to a greater understanding of physiological processes in vertebrates. His theory was keenly illustrated in 1956 when he discovered a disturbance of coagulation in the horseshoe crab when it was naturally infected with vibrio bacteria. Developed on the trajectory of Dr. Bang's discovery, a commercially available extract of the horseshoe crab's blood serum is now widely used to screen human injections for endotoxins.

As professor and chairman of the Department of Pathobiology, Dr. Bang's broad outlook provided the intellectual underpinnings for studying the distribution of disease patters in populations. In addition, his expansive field-based efforts led to the establishment of the Hopkins Center for Medical Research and Training in Calcutta, India, and Dacca, Bangladesh, which have had a lasting effect on the School and its activities.