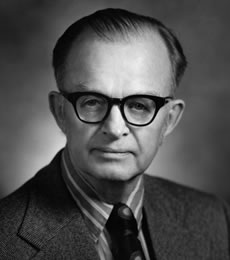 Lewis Robbins was a saltwater fisherman and boater. One of his favorite sayings was "Instead of trying to salvage a sinking ship once it has crashed, a good sea captain will change the course when he sees danger ahead." It was a goal he reached as a physician and scientist.

In 1958-59, he wrote the first U.S. surgeon general's warning on the health hazards of tobacco, helping to launch medicine's war on smoking. Dr. Robbins' papers reflect his efforts to educate physicians in emerging techniques of screening patients for breast, cervical, and rectal cancer.

Dr. Robbins was in the U.S. Public Health Service from 1941-68 and for eight years was the first chief of cancer control programs. He served in each state in the U.S. and 23 foreign countries, and was one of the first Americans in Vietnam. While there, he fought malaria and guerilla troops.

After retirement in 1968, Dr. Robbins worked with a program to advise physicians on ways their patients could have what he called "a survival advantage" by changing poor lifestyle habits.