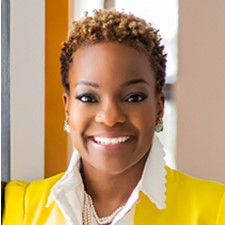 Cherée Johnson is Senior Vice President, General Counsel, and Corporate Secretary and also serves as Chief Ethics and Compliance Officer at W.R. Grace, Incorporated. W.R. Grace is a global leader in specialty chemicals company based in Columbia, Maryland. Prior to this role, Johnson served as VP, Deputy General Counsel for McCormick & Company, the world’s largest spice company (market cap of $24.5B) and global leader in flavor that manufactures, markets and distributes spices, seasonings and condiments and other products to the entire food industry. Johnson serves as general counsel for the Consumer Products Business as well as the businesses in the Asia-Pacific region ($3.4 billion revenue). She is a business focused legal executive who is innovative and collaborative and operates across a global spectrum of disciplines.

Johnson joined McCormick from KraftHeinz (formerly H.J. Heinz Company), the 3rd largest food and beverage company in North America and the 5th largest food and beverage company in the world (market cap of $31.2B), with eight $1 billion+ brands. At Heinz, she was a member of the US and European leadership teams as well as Head of European operations residing in Amsterdam, Netherlands. She joined KraftHeinz from Cargill where was Director and Associate General Counsel at Cargill. Prior to Cargill, she was Intellectual Property Counsel at 3M but began her career as a Product Development Engineer at 3M Company.

Johnson earned her Bachelor of Science degree in chemical engineering (with Honors) at Florida A&M University and her Juris Doctor at the University of Minnesota Law School. She is a member of several boards including Manchester Bidwell Corporation, CollegeBound, and LEADERship Baltimore. She is a registered patent attorney and member of the American Bar Association and USPTO Patent Bar.

Over the years, Johnson has been recognized by her peers and awarded “Top 100 Women of Maryland”, “Nation’s Best” Lawyer, “Top Lawyer in Maryland”, “Mayor’s Award for Excellence” and most recently selected to serve as the official spokesperson of the American Heart Association.

Johnson resides in Baltimore with her husband Steffan, and their two children.