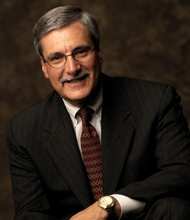 Michael J. Klag is an internist and epidemiologist who earned his medical degree at the University of Pennsylvania and his MPH degree from the Johns Hopkins School of Hygiene and Public Health. For eight years, he was Director of the Division of General Internal Medicine and was the first Vice Dean for Clinical Investigation at the Johns Hopkins School of Medicine, where he instituted new policies and procedures for oversight of human subject research.

Dr. Klag is a world renowned kidney disease epidemiologist whose scientific contributions have been in the prevention and epidemiology of kidney disease, hypertension and cardiovascular disease. He was one of the earliest investigators to apply epidemiologic methods to the study of kidney disease. In doing so, he and his collaborators were able to first determine that the U.S. was in the midst of an epidemic of end-stage kidney disease, determine the incidence of kidney disease, and publish the risk of developing kidney disease associated with blood pressure, diabetes, race, socioeconomic status and other factors. These findings are considered landmark contributions to the field. He directs one of the longest-running longitudinal studies in existence, the Johns Hopkins Precursors Study, which began in 1946. Results of that study demonstrated that serum cholesterol measured at age 22 predicts cardiovascular disease in midlife. This work had a profound impact on the policy related to cholesterol screening in young people. His research has also shown that health behaviors and other factors lead to the development of hypertension, and that differences in risk of hypertension in urban and non-urban societies can be explained by differences in health behaviors.

Dr. Klag is the author of over 200 publications and was the editor-in-chief of the Johns Hopkins Family Health Book.