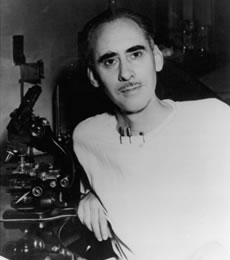 At the outbreak of World War II, John Hanks, with family in tow, was living at the leprosarium at Cebu, Philippines, struggling to unlock the microbiology of leprosy bacillus. Japanese occupation forces had rendered the conditions for practicing science all but impossible by limiting the flow of necessary laboratory supplies. But Dr. Hanks, a man of renowned creativity, found a way to produce the media he was lacking with plant components and spring water, which was superior to what he could have distilled in the lab.

This kind of commitment drove five decades of leprosy research and earned Dr. Hanks an international reputation as a leading leprologist and heroic scientist.

His lifelong goal was to culture the leprosy bacillus; through his attempts, he became a pioneer and teacher of tissue culture techniques. One important innovation was the Hanks Balanced Salt Solution, a standard laboratory tool today.