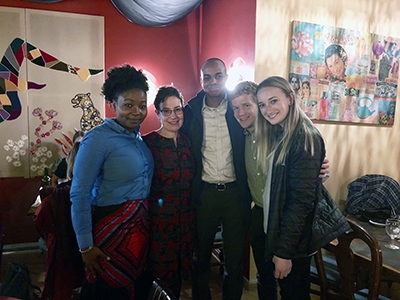 In 2009, the Department, under the leadership of Professor Ruth Karron, developed a vaccine-related internship program to fund students placed at the World Health Organization’s (WHO) Department of Immunization, Vaccines and Biologicals. Several years ago, the program expanded to include funded internships at Gavi, the Vaccine Alliance; Pan American Health Organization; the Centers for Disease Control and Prevention, Global Immunization Division; and UNICEF. Through the program, now called PAVE (Program in Applied Vaccine Experiences), students are able to gain valuable experience in vaccine research, policy and programs of global importance while fulfilling the Department’s MSPH practicum requirement. PAVE is co-funded by the Bill & Melinda Gates Foundation and the Department.

Ryan Thompson, who received an MSPH from the Department’s Global Disease Epidemiology and Control Program (GDEC), completed an internship at the World Health Organization (WHO). Recently, we were able to connect and I asked him about his experience at the WHO and what he’s been up to since graduating in March.

What were you working on as a PAVE scholar at WHO?
I was working on the Malaria Vaccine Implementation Programme (MVIP), which is a pilot implementation study being conducted by the WHO, PATH, and GSK in Kenya, Ghana, and Malawi.
The new malaria vaccine (RTS,S/AS01) finished its Phase III clinical trials a few years ago. However, the results were not quite as promising as many were hoping: the vaccine showed a clinical efficacy of about 39% against clinical malaria. This efficacy is only seen when children receive a full four-dose series of the vaccine and continue to use other malaria prevention interventions, such as bed nets, leaving a lot of challenges and uncertainty around the fate of RTS,S as a realistic malaria prevention tool in areas where malaria is endemic.

In response to these concerns about the vaccine’s efficacy and general impact, WHO mandated the MVIP. The study is introducing RTS,S vaccine in all three countries. Certain regions of each country will be randomized to either receive RTS,S vaccine or a placebo. The aim is to compare the vaccinating and placebo arms to evaluate the feasibility, safety, and impact of delivering the four-dose RTS,S vaccine.

When I was at the WHO, MVIP was still largely in its preparatory stages. My main role was as a “data architect,” helping design and program the study database and figure out how data would be collected and flow from all of the study sites to Geneva. The challenge was very daunting given the scope of the study: approximately 240,000 children are expected to be vaccinated annually in each of the three countries. Data will be coming from a number of different sources and levels within each country, so I spent a lot of time figuring out how to harmonize the data across study sites to optimize it for collection and integration with incoming information from other study sites and data sources. My project allowed me to work with experts not only from the WHO, but also the London School of Hygiene and Tropical Medicine, PATH, and GSK, as well as from universities and staff from the three countries where the project was being implemented.

Has the program got off the ground yet? And, if so, have you followed its progress?
Yes! The fruits of the team’s collective efforts finally paid off last month, when Malawi rolled out RTS,S in the communities receiving vaccinations! Ghana followed suit shortly afterward, introducing the vaccine at the end of April, and Kenya is expected to introduce the vaccine later this month. The study is expected to run through the end of 2022, with about 10 million doses of RTS,S administered by the end of the study. Data collection has already begun, and we are waiting with bated breath to see how well the WHO database can collect, integrate, and analyze information from all of the different data sources and forms.

Where have you been working since graduating?
After graduation, I worked at the Johns Hopkins International Vaccine Access Center (IVAC) for a few months in the Economics and Finance Division. I was helping design models for a study to estimate the cost-effectiveness of different vaccination schedules for administering routine vaccines such as measles in low- and middle-income countries.

Last month, I moved to the Bay Area to start at the University of California, San Francisco. I’m working as a study coordinator at the Proctor Foundation. I help design and run randomized clinical trials to identify new medicines and procedures to treat various infectious eye diseases. Eventually, I hope to manage and run community trials at field sites in low- and middle-income countries. Hopefully studying malaria or vaccines!