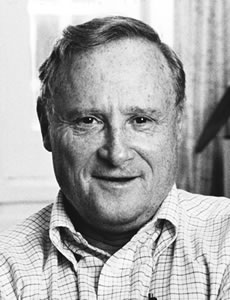 The Lawrence Grossman Lectureship was established by the Department of Biochemistry and Molecular Biology of the Johns Hopkins Bloomberg School of Public Health and by Larry’s colleagues, friends, and family. This lectureship honors his pioneering achievements in the field of DNA repair, as well as his superb leadership as the E.V. McCollum Professor and Chair of the Department of Biochemistry for 14 years, from 1975 to 1989. At the conclusion of this term as chair, he was appointed University Distinguished Service Professor.

Lawrence Grossman was born in New York City in 1924. He left high school in 1941 to support his family just a month before the entry of the United States into World War II. Since he had always been fascinated by airplanes and flying, he enlisted in the United States Navy as an aviation cadet. Larry spent the war years in the Pacific Ocean Theater, flying fighter planes from the decks of aircraft carriers. An ace pilot, he was awarded two Distinguished Flying Crosses. Following the war, Larry resumed his education under the GI Bill. He first studied engineering at City College of New York, but later transferred to Hofstra for his bachelor’s degree in biology and chemistry. Larry earned his PhD in biochemistry at the University of Southern California in 1954. He subsequently joined the laboratory of Nathan Kaplan in the McCollum-Pratt Institute on the Homewood campus of Johns Hopkins University.

Larry’s first independent position was at the National Institutes of Health in Bethesda. However, in 1957 he was persuaded to join the new Department of Biochemistry at Brandeis University, which was being organized by his mentor Nathan Kaplan. At Brandeis, Larry embarked on his pioneering studies on the repair of lesions in DNA, using the enzymological approaches he had mastered earlier. Larry returned to Johns Hopkins in 1975 as the E.V. McCollum Professor and Chair of the Department of Biochemistry in the School of Hygiene and Public Health. His vision, drive, and personal warmth produced dramatic revitalization of the research and training programs of this department, and his achievements as chair still benefit BMB today.

Grossman’s notable research accomplishments include the first demonstration of the permanent denaturation of DNA (with formaldehyde). His laboratory discovered and characterized several enzymes active in repairing UV-induced lesions in DNA and went on to analyze the enzymatic mechanisms of thymine-dimer glycosylases and of abasic endonucleases from M. luteus. Later, at Johns Hopkins, he and his colleagues investigated the organization and mechanism of the UvrABC multienzyme, nucleotide-excision complex from E. coli; this system performs repairs to DNA damaged by the presence of mutagenic bulky adducts, including the cyclopyrimidine dimers produced by UV light. Perhaps the crowning achievement of Grossman’s distinguished career was his development of a highly sensitive assay for measuring total DNA repair in human cells; this assay provides a powerful tool for the molecular epidemiology of skin cancer and other tumors of environmental origin.