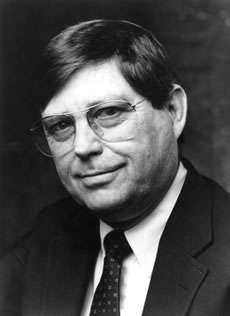 Larry L. Ewing joined the faculty of the Johns Hopkins Bloomberg School of Public Health (formerly the Johns Hopkins School of Hygiene and Public Health) in 1972 as a professor in the Department of Population Dynamics and the first director of the Department’s new Division of Reproductive Biology. His research on Leydig cell structure, function, and regulation, which spanned more than 25 years until his death in 1990, earned him recognition as one of world’s respected scholars on male reproductive physiology.

Born in Valley, Nebraska, Ewing received his Bachelor of Science degree from the University of Nebraska in 1958, and earned his PhD in reproductive physiology from the University of Illinois in 1962. It was during his doctoral studies that Ewing began his research on the structural and biosynthetic properties of the Leydig cell, the testosterone-producing cell of the testis. After completing his doctorate, Ewing became an assistant professor in the Department of Physiology and Pharmacology at Oklahoma State University, where he expanded his research to the use of testosterone and estradiol, administered by sustained-release Silastic capsules, as a male contraceptive.

Ewing was recruited to the School by W. Henry Mosley, MD, in 1972. His lab developed a method for the isolation of highly purified, steroidogenically active Leydig cells that now is used around the world. The author of approximately 140 major publications, he held a patent on the sustained release of steroids for male contraception. Ewing founded and was later president of the Society for the Study of Reproduction, receiving its Distinguished Service Award, served as editor-in-chief of Biology of Reproduction and was president of the American Society of Andrology.

He served on major committees of the NIH, EPA, FDA, and the National Academy of Sciences. At the School, he was president of the Faculty General Assembly and chair of the Appointments and Promotions Committee, among many other service responsibilities.

1993 - 3rd Annual
Claude Desjardins, PhD
University of Virginia
"The Microcirculation: A Window on Vascular and Steriodogenic Cell Performance in the Testis"