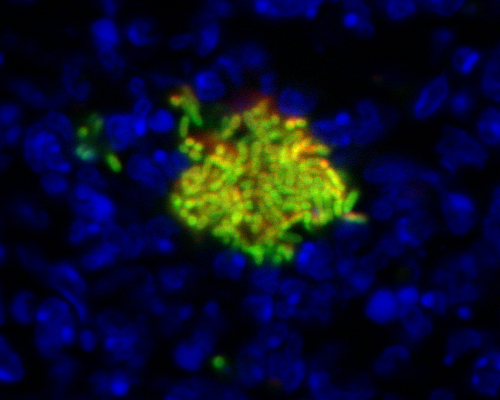 William H. Welch, the founding dean of Johns Hopkins School of Medicine and the School of Hygiene and Public Health, and recognized as the founder of scientific medicine in America ("the Dean of American Medicine"), also founded MMI, formerly the Department of Bacteriology.

Among his numerous contributions to medicine and public health, Welch in 1892 discovered the gas gangrene-causing bacterium—named after him as Welch Bacillus, subsequently called Clostridium perfringens or C. welchii. John Hanks, another of the early members of the Department, is famed for his Hanks Balanced Salt Solution and for his pioneering work on the leprosy bacillus (Mycobacterium leprae). The Department’s interest in mycobacteria is now focused on the resurgence of tuberculosis (TB) and particularly the emergence of multidrug-resistant tuberculosis (MDR-TB) as a major public health problem.

Bacterial virulence factors have traditionally been identified by generating mutant bacteria that lack an individual gene product, and then testing the ability of mutant bacteria to replicate within a host organism.  While this has identified many bacterial factors that contribute to disease, and many potential drug targets, this approach fails to determine when a given gene product may be important over the course of infection, and if all the individual bacteria within a population produce this factor.  Dr. Kimberly Davis’ laboratory studies the heterogeneity within bacterial populations to determine which individual cells express virulence factors over the course of infection, and if host immune cells drive the formation of specific subpopulations of bacteria within a Yersinia pseudotuberculosis mouse model of infection.

Notably, bacteria do not have to be pathogenic to play important roles in human health and disease. Our body hosts trillions of symbiotic bacteria, viruses, fungi, and protozoa that play critical roles in the development and homeostatic function of the various body systems. The laboratory of Dr. Jotham Suez seeks to decode the mechanisms through which the microbiome shapes our health, and decipher how microbiome perturbations underlie human pathologies. Through a combination of metagenomics, transcriptomics, metabolomics, and gnotobiotics, the Suez lab aims to identify the molecular pathways that mediate the cross-talk among symbiotic microbes and between the human host and its microbiome. The goal: harnessing the microbiome for developing precision medicine, and microbiome-based therapeutics.