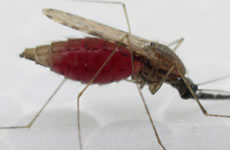 Insect vectors are critical components of the life cycle of many of the newly emerging and pandemic infections affecting the world today. Medical entomology research at the Johns Hopkins Bloomberg School of Public Health and the Department of Molecular Microbiology and Immunology has a long history with many pioneering discoveries and contributions.

Dr. Lloyd E. Rozeboom earned his ScD in medical entomology from the Johns Hopkins School of Hygiene and Public Health in 1934 and joined the School's faculty five years later. His research encompassed many aspects of medical entomology, from basic studies of mosquito genetics, speciation and mosquito taxonomy to field studies of malaria and filariasis to laboratory research on the transmission of arthropod-borne viruses. Dr. Milan Trpis, a legendary mosquito biologist, published his first manuscript on mosquito vectors in 1954 and in 2006 was still publishing on how the distribution of black flies in Liberia affects the incidence of onchocerciasis in that country.

Dr. Douglas Norris and his laboratory colleagues focus on aspects of environmental control. The group has found differential levels of insecticide resistance in mosquitoes from African villages using differing levels of agricultural insecticides. They are using molecular population genetics to investigate the structure of mosquito populations with the goal of understanding the flow of resistance to insecticides or parasite infection from one population to the next. Current research activities in the laboratory are focused on malaria in West and Southern Africa, Lyme disease, Rickettsia-like and other tick-borne bacteria in the Eastern U.S. and dengue in South America.

Dr. George Dimopoulos and his group are targeting parasite/vector interactions, with a particular interest in mechanisms of the mosquito's immune system implicated in killing malaria parasites and dengue viruses. They have developed genetically modified super-immune mosquitoes that are resistant to infection in the gut tissue. Another focus of Dr. Dimopoulos' group is the mosquito microbiota and its role in influencing the insect’s capacity to transmit human pathogens. Through a combination of field and laboratory studies, the research team has identified several bacteria species that inhibit both Plasmodium and the dengue virus in their respective mosquito vectors.

Dr. Marcelo Jacobs-Lorena's team focuses on the investigation of molecular mechanisms by which the malaria parasite develops in its vector mosquito to allow transmission from one vertebrate host to another.  Previously, the laboratory developed a genetically modified mosquito that is impaired for parasite transmission. They are currently exploring an alternative strategy to genetically modify symbiotic bacteria from the mosquito gut for the production of anti-parasitic substances. Mosquitoes carrying such bacteria are substantially impaired in parasite transmission.

The laboratory of Dr. Conor McMeniman is studying the mosquito’s olfactory system, and how it is implicated in host seeking, an essential feature of disease transmission. The group is particularly interested in chemosensory cues and neural circuits that drive mosquitoes to find humans, and the fascinating problem of how pathogen infection alters vector behavior. This work is expected to provide new insights into the chemical, molecular, and cellular basis of mosquito attraction to humans, and catalyze the development of targeted strategies that interfere with their ability to find humans and transmit disease.