Private Gifts Add Up to a Big Breakthrough

“It happens quite often,” Jiou Wang says offhandedly.  His email inbox has just pinged with another request from a scientist who wants to collaborate with his lab or just borrow his reagents. Wang’s lab has been in the spotlight since March, when Nature published news of the team’s pathbreaking discovery of the sequence of post-mutation molecular events that triggers amyotrhopic lateral sclerosis (ALS, or Lou Gehrig’s disease). 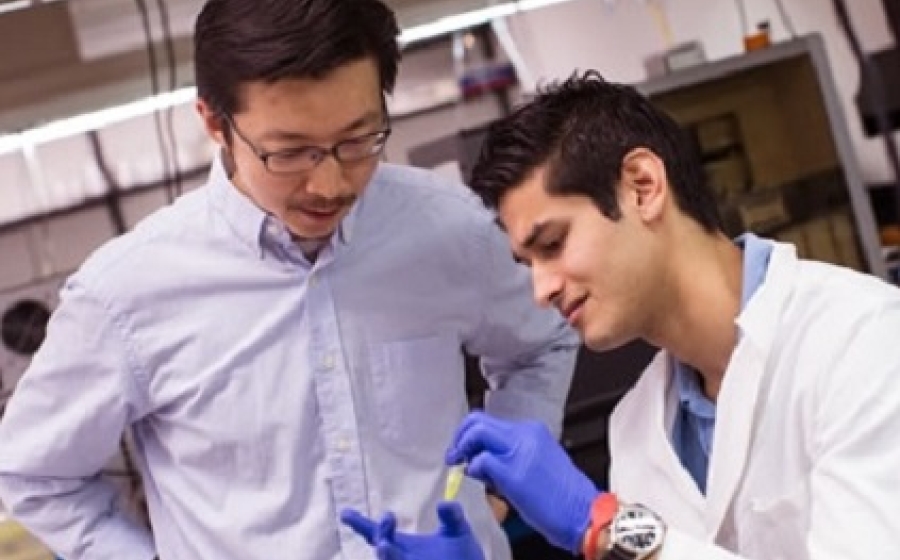 By analyzing the mutation’s structure at the RNA and DNA levels and identifying the causes of interference with protein production in diseased cells, Wang’s team found the probable root cause of ALS. This discovery pinpointed the best place to intervene with drugs to correct the shapes of DNA molecules and arrest the downstream pathways, thereby preventing the onset of disease.

One surprising feature of the ALS discovery is that it was funded largely by small private grants of between $10,000 and $85,000. Wang stresses that “private funding couldn’t have been more important” in making the Nature article possible. When the Department of Biochemistry and Molecular Biology (BMB) first recruited Wang in 2009, a private donor provided start-up funding for his lab. Of the ultra-competitive world of federal funding, Wang observes that “Competition drives excellence, but I  believe that freedom and stability allow creativity to flourish.”

In Wang’s case, that unfettered creativity began to pay off quickly. In his first few years, Wang received one of the annual grants from the JHSPH Faculty Innovation Fund, which is supported by annual fund contributions. Then he received two more substantial grants: $80,000 from the ALS Association and $85,000 from the Robert Packard Center for ALS Research at Johns Hopkins.

Such private grants serve as incubators for promising young researchers like Wang, allowing them to gain the necessary momentum and initial results to make them competitive for their first R01 grants from NIH. As Pierre Coulombe, chair of BMB, noted proudly, “Jiou has beat our expectations and was able to get external support way ahead of schedule—within a year of joining the faculty. That has helped Jiou create the circumstances that have led to this discovery.”

For his ALS breakthrough, Wang was the inaugural recipient of the 2014 Shikani/El-Hibri Prize for Discovery and Innovation, established by Alan H. Shikani, MD, who directs the Maryland Nose and Sinus Rhinology Program, and Fuad El-Hibri, founder and chair of Emergent BioSolutions, Inc. “Our goal,” explained Shikani, “is to honor clinician-scientists whose research has the potential to significantly advance biomedical science and eventually translate into improved patient care. Our hope is that the Shikani/El-Hibri Prize will inspire others to want to make a difference, and support the new generation of Hopkins researchers.”

Since personnel, not equipment, is the biggest expense for laboratory research, Wang and his colleagues are eager to secure endowments for professorships and scholarships. Such stable funding will enable JHSPH scientists to test unconventional ideas, or to train a postdoctoral fellow for up to six years—the amount of time required to learn a highly complex field such as the molecular genetics of neurodegenerative diseases. “They’re concentrating on their research and make a lot less money than their peers who go into industry,” Wang says. “They’re doing it for the love of science, not a salary, and funding them is the best investment donors can make.”