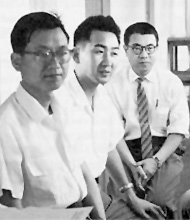 As a young Japanese pediatrician, Dr. Kanji Iio helped to conduct the landmark Child Health Survey (1957-61) under the auspices of the Atomic Bomb Casualty Commission, which initiated extensive health studies on atomic bomb survivors in cooperation with the Japanese National Institute of Health.

Dr. Iio received an NIH fellowship to study public health at JHSPH and graduated with an MPH in 1964. He contributes each year to the JHSPH Annual Fund because he believes that “it is my duty to return that [gift] to the U.S. during my life.”

After returning to Japan, Dr. Iio joined the faculty of the Department of Child Health at Osaka City University and later at Kyoto University. In 1968, he founded a pediatric clinic in Matsuyama, Japan, which is now directed by his daughter. Dr. Iio enjoys an ongoing relationship with the school and stays up to date by reading publications, cards, and letters from JHSPH. With more donors like Dr. Iio, JHSPH can support the next generation of future public health researchers and leaders from around the world.