Ashok Agarwal, MBBS, MPH ’83, is living proof of the proverb, success has many fathers.

ASHOK WAS THE YOUNGEST of six sons born to Indian businessman and philanthropist Shri Prabhu Dayal Agarwal. In India, the honorific title "Shri" indicates an individual of noble or even divine character, similar to "Sir" or "Lord" in English. The elder Agarwal founded and built the largest trucking company in Asia, and then started the Bhoruka Charitable Trust, today one of India's leading rural development NGOs.

At his father's urging, the young Agarwal studied medicine, surgery, and public health. After completing a residency in internal medicine and emergency care in Calcutta (now Kolkata) in 1982, he contacted the head of the MPH program at Johns Hopkins, renowned epidemiologist Abraham Lilienfeld (MPH ’49). Even though it was well past the application deadline, Lilienfeld "broke all the rules and made all the exceptions" to admit Agarwal after he heard the young foreigner's proposal to transform the health care system in his native country by establishing India's first non-profit health management institute.

After graduating from JHSPH in 1983, Agarwal went to Jaipur to found the Indian Institute for Health Management Research (IIHMR), the first institute of its kind in Asia for research and training in public health and hospital management. In the early 1980s, said Agarwal, nobody in India knew much about management, and public health had faded into the background.

In its infancy, the Institute benefited from some of the best minds in international health and health systems research, such as JHSPH dean D. A. Henderson (MPH ’60). Henderson's managerial genius had been decisive in the WHO global smallpox eradication campaign, and he made five trips to India while serving on the IIHMR board of trustees. He recalled his first impressions of Agarwal as a student:

From my first meetings with Dr. Agarwal, I was impressed by his keen insight, his dedication to public health, and his determination to effect creative change in India.  He perceived that a graduate institute dedicated to education and research in health systems management could be an essential catalyst. This would require an institution of size and one that commanded international respect.  It was a formidable challenge but successfully carried out to become the now renowned Indian Institute for Health Management Research.

The Institute was shaped by Henderson's conviction that public health, in order to be effective, must have a sound managerial knowledge base and trained force of professionals.

Other consultants were Carl Taylor, the founding chair of the JHSPH Department of International Health, and Timothy D. Baker (MPH ’54), whose vision had helped to establish the department. Taylor and Baker emphasized to Agarwal the power of public health to accomplish far-reaching change on a mass scale at very low cost. Backed by these public health giants and Indian thought leaders such as N.S. Deodhar, Harcharan Singh, R.M. Maru, Rameshwar Sharma, and M.L. Mehta, the Institute took on the daunting task of training Indian managers to weave best practices into the fabric of public health and hospital administration.

Agarwal sees management as a shaper of culture: "Good habits that promote health become a culture, which endures for generations." Agarwal and his IIHMR colleagues had to win acceptance for their radical new ideas from both the government and the private sector. Slowly and painstakingly, the IIHMR built the evidence base for management in areas such as the logistics of vaccine program administration and the most effective distribution methods for making lifesaving medicines available.

IIHMR has emphasized strengthening health systems by promoting and conducting health policy and program management research and capacity building. In recognition of IIHMR's significant contributions in this field, IIHMR was designated a WHO Collaborating Centre for District Health Systems based on Primary Health Care. On September 27, 2013, an act of the State Legislative Assembly of Rajasthan granted university status to IIHMR, making it the first research university to specialize in policy and management  in the health sector. The IIHMR University offers primarily postgraduate education in public health, health management, and related areas.

After Agarwal was named a trustee of the Bhoruka Charitable Trust in 1987, he began to guide an intensive rural development program that would ultimately grow to include 800 villages in rural Rajasthan, the northern state where Jaipur is located. Agarwal led the Trust in implementing a range of initiatives in education, economic development, water, sanitation, and health.

One example was HIV/AIDS programs in Rajasthan as well as the high-prevalence southern states of Karnataka and Andhra Pradesh, which leveraged the Agarwal family’s trucking industry connections to mount an effective prevention program among Indian truckers.

Perhaps the most fundamental, life-threatening problem throughout India is sanitation and access to clean water. Of India’s population of 1.3 billion, nearly three-quarters live in the country’s 638,000 villages, which pose unique challenges and possibilities for health and sanitation.

In Rajasthan, where much of the water supply is highly saline, Agarwal's program for the Bhoruka Charitable Trust employed guards to ensure that the fresh-water ponds were only used for human drinking water, not watering animals or bathing. He observed that disease rates dropped dramatically in the villages with guarded water supplies, and he conducted studies that demonstrated the effectiveness of this intervention. Agarwal also helped to develop the world’s largest user fee-based rural drinking water supply, Aapni Yojana, which serves about half a million people in 350 villages.

Agarwal noted that despite the rapid growth of large cities, “people will live where they have jobs and land, and rural people want to stay on the land. Government will never provide all their needs, even in cities, and villagers have the ingenuity and money to take care of themselves, with an extra nudge from the government.”

In his dedication to improving the quality of Indian village life, Agarwal emulates Taylor who, when pressed to choose between programs to benefit the scattered majority of village-dwellers or more cost-effective programs for city-dwellers, always declared, “Invest in the villages!” 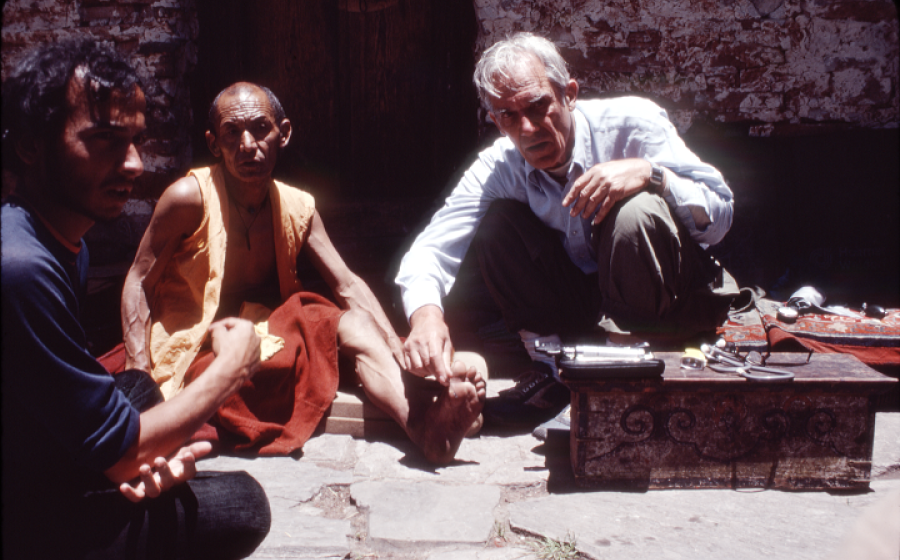 After Michael J. Klag (MPH '87) was named JHSPH dean in 2005, he met Agarwal and became a key supporter of IIHMR, committing to a collaborative partnership with JHSPH to expand the scale of IIHMR research and education programs. Today, in addition to its flagship campus in Jaipur, IIHMR includes centers in Delhi, Bangalore, Kolkata, and Kabul. In 2009, Klag named Agarwal to serve on the JHSPH Health Advisory Board, where Agarwal noted that “Members take their work very seriously.”

At his very first meeting, Agarwal volunteered to host the group in Delhi and Jaipur to see the work of the IIHMR first-hand during the HAB's tour of India and Bangladesh the following spring. In turn, Agarwal visited the extensive research site of JiVitA, the JHSPH nutrition and maternal and child health study in Bangladesh.

He immediately saw JiVitA’s relevance for similar programs in India, and later sent IIHMR representatives to JiVitA to exchange ideas. “The beauty was,” Agarwal remembered, “they weren’t just helping large numbers of people, they were creating data for excellent research that could be implemented successfully in other countries.”

Health Advisory Board at IIHMR

More recently, Dean Klag has enlisted JHU President Ron Daniels in working to develop and expand IIHMR, and in February 2013, Daniels traveled to the Jaipur campus to give the P.D. Agarwal Memorial Lecture, titled "Frontiers of Higher Education: Access, Quality and Innovation in India and the United States.” That fall, JHSPH and IIHMR enrolled the first students in a Jaipur-based MPH program for residents of India and other low- and middle-income countries in the region. The program is focused on public health capacity building in developing countries, with emphasis on health management skills to enhance the effectiveness and efficiency of public health programs and services.

In 2014, Agarwal joined the Johns Hopkins University Board of Trustees. His hopes and expectations for the university are high, and he intends “to learn a lot and bring that back to Indian universities.” With its ethos of “knowledge for the world,” Johns Hopkins has much to offer students from the U.S. and abroad who want to become agents of change in the affairs of nations and in international diplomacy.

Agarwal wants to spread the strengths of the Bloomberg School—its depth of experience in global health research and training the future health leadership for nations around the globe—to raise the global profile across JHU divisions, especially in opening more opportunities for foreign undergraduates and graduate students. He emphasizes the importance of bringing all the divisions together to solve the world’s biggest problems, citing as an example the work of the Johns Hopkins Water Institute, which collaborates with Agarwal.

Indeed, supplying the world with clean water for the longterm future will require a multitude of insights, creatively combined. If there is a successful solution, Shri Ashok Agarwal will be one of its many fathers.