Kamran Siddiqi, PhD, discusses policies related to smokeless tobacco in low- and middle-income countries during this lecture presented by the Institute for Global Tobacco Control

The lecture will be followed by a brief moderated Q&A and a recording of the event will subsequently be posted to IGTC’s YouTube channel.

Upon approval of registration, attendees will receive a personalized Zoom link to access the webinar. 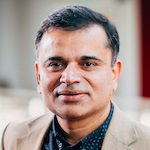 Kamran Siddiqi, PhD, is a clinical academic with a background in chest medicine, public health, and epidemiology. He works at the University of York, UK, as a professor in global public health and is the associate dean (international) at Hull York Medical School, UK. He also holds an honorary consultant post in public health medicine at Public Health England. He is the director of an NIHR-funded Global Health Research Centre on preventing non-communicable diseases called IMPACT. He has served on several national funding boards and national and international guideline development committees. Kamran has published extensively on TB, tobacco control, and tobacco cessation.

Jared Earley
jearley4@jhu.edu
Back to Calendar