University of California, San Francisco and Johns Hopkins University today announced the addition of 1.4 million documents to their Opioid Industry Documents Archive from Mallinckrodt, a leading generic opioid manufacturer now in bankruptcy. The company is one of many in the opioid industry currently implicated in the deaths of hundreds of thousands of people due to misleading marketing, sales, distribution, dispensing, and governance practices.

The archive, launched by the two research universities in March 2021, is a digital repository of publicly disclosed documents arising from ongoing opioid litigation brought by local and state governments and tribal communities against opioid manufacturers, wholesalers, and pharmacies. The Mallinckrodt company agreed to release documents produced during litigation as part of their settlement in recent legal cases with the plaintiffs. Starting today, the documents in the archive are available to and searchable by the public, including families impacted by the opioid crisis as well as the media, health care practitioners, students, lawyers, and researchers.

Documents in the archive reveal the many ways opioid litigation defendants sought to increase sales of drugs they knew to be addictive and deadly. Defendants’ tactics included using misleading marketing materials, enlisting health care providers as lobbyists, casting doubt on the drugs’ addictiveness, ignoring or downplaying health risks, and overlooking evidence of opioid oversupply and unsafe use.

“We are glad these documents will now see the light of day, thanks to this initiative. It is so important that the public have an opportunity to study, analyze, and act upon this information,” said G. Caleb Alexander, MD, MS, professor of Epidemiology and Medicine at the Johns Hopkins Bloomberg School of Public Health and co-founding director of its Center for Drug Safety and Effectiveness. Alexander, who has provided expert testimony on behalf of plaintiffs in federal and state opioid litigation, added, “We invite anyone interested in the roots of the opioid epidemic, and the role that manufacturers like Mallinckrodt played, to delve into and search and study these materials.”

The release of these 1.4 million documents coincides with the announcement of the Opioid Industry Documents Archive National Advisory Committee. Members include bereaved family members and others directly impacted by the epidemic, as well as investigative journalists, legal and addiction experts, archivists, historians, and health policy analysts. The archive is designed to accommodate new documents from future settlements or judgments as part of opioid litigation.

Founded in 1867 in St. Louis, Missouri, Mallinckrodt was an early producer of codeine, morphine, and photographic chemicals. The company eventually came to dominate the generic opioid market through a subsidiary, SpecGx, at a time when addiction and overdose rates were spiking across the United States. According to DEA records, the company provided nearly 40% of all opioid pills sold in U.S. pharmacies from 2006 to 2012.

In 2011, Mallinckrodt company came under investigation by the DEA for failing to meet its requirements to track and report suspicious and excessive orders of controlled substances. The company was later named as a defendant in thousands of lawsuits consolidated through Multidistrict Litigation (MDL 2804). Plaintiffs accused the company of trivializing and hiding the risks of addiction, as well as failing to use its data to identify and report suspicious orders of opioid supplies.

“It’s so rare for us to have a full window into the strategies and tactics used by industry to increase use of a product that has and continues to have such deadly consequences,” said Kirsten Bibbins-Domingo, MD, PhD, Vice Dean for Population Health and Health Equity and professor and chair of the departments of Epidemiology and Biostatistics at the UCSF School of Medicine. “Open-access archives such as these play a critical role in ensuring we learn from the past to help avoid such crises in the future.”

According to the Centers for Disease Control and Prevention, the first wave of opioid overdose deaths in the U.S. began with increased opioid prescriptions in the 1990s, with overdose deaths involving prescription opioids increasing since at least 1999. Nearly 841,000 people in the U.S. have died from an overdose involving opioids, including prescription and illicit opioids, since 1999, according to the CDC. The economic costs have also been colossal. The White House Council of Economic Advisers’ most recent analysis estimates that the opioid epidemic cost $696 billion in 2018, and more than $2.5 trillion between 2015 and 2018.

“We can't accept the toll of the opioid crisis and move on,” said Joshua Sharfstein, MD, the Johns Hopkins Bloomberg School’s vice dean for Public Health Practice and Community Engagement and director of the Bloomberg American Health Initiative. “We must learn. The opioid archives are an essential resource for understanding what happened and how we can prevent such disasters.”

The opioid archive is modeled after UCSF’s groundbreaking Truth Tobacco Industry Documents archive, which has fostered scientific and public health discoveries shaping tobacco policy in the U.S. and around the world.

“Archives are sources for truth,” said Kate Tasker, MLIS, UCSF Industry Documents Library’s managing archivist. “We are collecting and preserving these documents for long-term public access so that anyone who wishes to examine them can do so freely—now and in the future—to understand and address one of the biggest public health crises in the United States in the 21st century.”

Johns Hopkins is America’s first research university. For more than 140 years Johns Hopkins has been a world leader in both teaching and research, with nine academic divisions—the Krieger School of Arts and Sciences, the Whiting School of Engineering, the Bloomberg School of Public Health, the Carey Business School, the Peabody Institute, the Paul H. Nitze School of Advanced International Studies, and the schools of Medicine, Nursing, and Education—plus the Applied Physics Laboratory, a nonacademic division that supports national security and pursues space science. 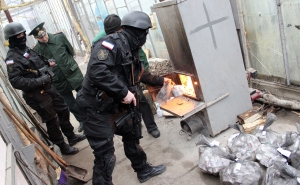 No Safe Place: Substance Use Therapy in Wartorn Ukraine