The documents stem from litigation against the Arizona-based company, which specialized in drugs to treat cancer pain. Subsys, a fast-acting and highly potent opioid painkiller, had been approved by the FDA only to treat pain in cancer patients already receiving around-the-clock opioid therapy.

The Opioid Archive records released today—about 760,000 documents, mostly emails—show that Insys improperly sold vast amounts of its addictive product for off-label uses like non-cancer neck and back pain. The documents also bring to light how the company pressured doctors and deployed deceptive marketing to increase sales and earn millions of dollars in profits.

“The Insys records vividly illustrate one of the root causes of the opioid epidemic— the widespread failure of safeguards meant to prevent the inappropriate use of fentanyl and other potentially dangerous controlled substances,” said G. Caleb Alexander, MD, MS, professor of epidemiology and medicine at the Johns Hopkins Bloomberg School of Public Health and co-founding director of its Center for Drug Safety and Effectiveness. Alexander has served as a paid plaintiff’s expert in federal and state opioid litigation. “These drugs were given to thousands of patients who didn’t need them and should never have taken them.”

Founded in 1990 and incorporated in 2002, Insys Therapeutics tapped an opioid market niche by selling TIRF (transmucosal immediate-release fentanyl) medications, which are intended for “breakthrough” pain in cancer patients already taking other opioid painkillers. Subsys, the company’s patented spray-delivery TIRF, was launched in 2012. Prescriptions for Subsys resulted in $330 million in net revenue for Insys in 2015.

After a former Insys employee filed a whistleblower suit, the U.S. Department of Health and Human Services’ Office of Inspector General investigated Insys in 2013 for its sales and marketing practices. Arrests of physicians writing high numbers of Subsys prescriptions prompted further investigation of the company. States, counties, cities and individuals sued Insys, with many suits being consolidated into a multidistrict case. Top Insys executives, including the company’s founder and four other executives, were found guilty of racketeering conspiracy in a 2019 federal criminal trial.

In June 2019, Insys settled criminal and civil charges with the Department of Justice by agreeing to pay $225 million. The company filed for bankruptcy, sold the Subsys license to another pharmaceutical company, and stopped selling drugs in 2019. The bankruptcy settlement stipulated that all Insys records relating to the sale, promotion, marketing, compliance and reimbursements or payments relating to Subsys and Syndros (a non-opioid Insys product) be made public.

“The Insys conspiracy to bribe physicians to prescribe its medications would not be evident without this access to these corporate documents,” said Dorie Apollonio, PhD, professor of clinical pharmacy at the UCSF School of Pharmacy. “Knowing the details of how this happened will help decision makers promote public health policies that are informed by evidence and that protect the public from criminal, unethical and dangerous behaviors that lead to inappropriate prescription drug use.”

The Opioid Industry Documents Archive was launched by UCSF and Johns Hopkins in March 2021 as a free public resource. The digital repository includes publicly disclosed documents arising from litigation brought against opioid manufacturers, distributors, pharmacies and consultants by local and state governments and tribal communities.

For decades, as opioid addiction and deaths mounted, the public knew very little about the hidden business of making and selling prescription painkillers. Thousands of lawsuits have since shone a light on the industry’s secrets and practices. The Archive is collecting as many documents as it can and sharing them for the public to access and study.

The Archive captures in detail the misleading, deceptive and sometimes unlawful ways opioids were marketed, sold, distributed, prescribed and dispensed. It shows how many of the opioid litigation defendants had sought to increase sales of drugs they knew to be addictive and deadly.

The addition of the Insys documents will expand the Archive’s collection to more than 2.2 million opioid industry documents. The Archive may be of use to many different parties, including families harmed by the opioid crisis, as well as the media, health care practitioners, students, lawyers and researchers.

The Opioid Archive is modeled after UCSF’s pioneering Truth Tobacco Industry Documents archive, which has fostered scientific and public health discoveries shaping tobacco policy in the U.S. and around the world. Like its counterpart, the Opioid Archive is designed to accommodate new documents from future settlements and judgments as litigation continues.

According to the Centers for Disease Control and Prevention, the first wave of opioid overdose deaths in the U.S. began with increased opioid prescriptions in the 1990s, with overdose deaths involving prescription opioids increasing since at least 1999. Between 1999 and 2020, according to the CDC, more than 564,000 people in the U.S. fatally overdosed from prescription and illicit opioids. The White House Council of Economic Advisers’ most recent analysis estimates that the opioid epidemic cost $696 billion in 2018, and more than $2.5 trillion between 2015 and 2018.

Johns Hopkins is America’s first research university. For more than 140 years, Johns Hopkins has been a world leader in both teaching and research, with nine academic divisions—the Krieger School of Arts and Sciences, the Whiting School of Engineering, the Bloomberg School of Public Health, the Carey Business School, the Peabody Institute, the Paul H. Nitze School of Advanced International Studies, and the schools of Medicine, Nursing, and Education—plus the Applied Physics Laboratory, a nonacademic division that supports national security and pursues space science. 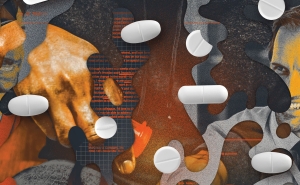