Johns Hopkins researchers working across the Schools of Public Health and Arts and Sciences discovered that poly(ADP-ribose) molecules can trigger the aggregation of FUS, a protein associated with neurodegenerative diseases such as amyotrophic lateral sclerosis, or ALS and frontotemporal lobar dementia, or FTLD. These findings suggest a possible novel mechanism linking PAR-tagged proteins, which are elevated in neurodegenerative disease patients, and the formation of FUS protein aggregates. 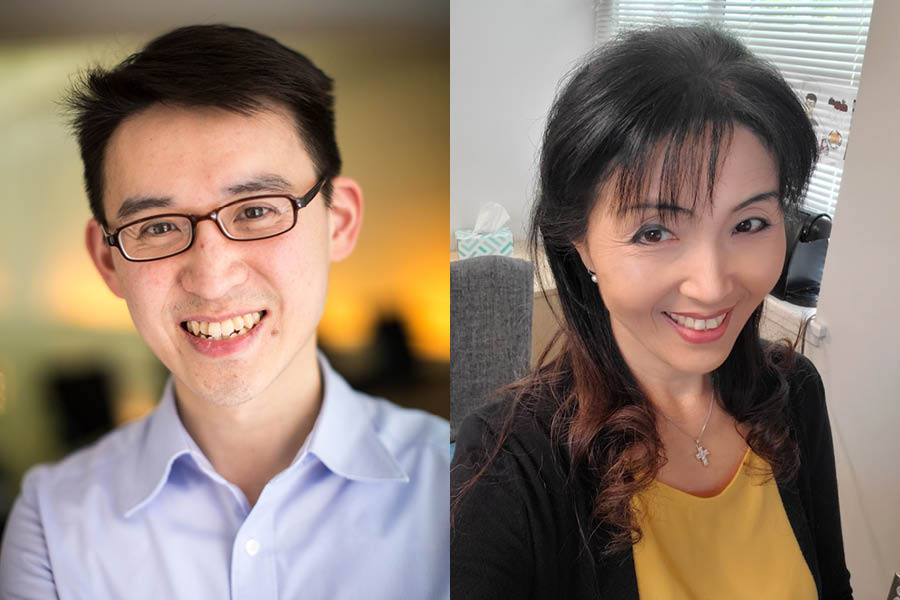 The research merges the expertise of both co-corresponding authors. Anthony Leung, PhD, associate professor in Biochemistry and Molecular Biology in the School of Public Health, who investigates the role of PAR protein modifications in cellular processes from viral infection response to cancer, and Sua Myong, PhD, professor in Biophysics at the School of Arts and Sciences, who examines the interactions of biological molecules using single molecule biophysics techniques.

Both labs study biomolecular condensates, compartments in cells that have distinct concentrations of molecules, but aren’t surrounded by membranes.

“How they can form a physical entity, without a physical barrier, that's the question that we're excited [about],” said Leung, whose lab has looked at the role of PAR in forming protein condensates, including stress granules.

The Myong lab studies FUS proteins condensates. In cells, FUS protein can be soluble, floating freely from each other, but they can also condense together, forming liquid-like droplets such as stress granules, or into even tighter aggregates. The aggregates are associated with ALS and FTLD, but what causes them in patients, and how to reverse them, isn’t understood. The Myong lab has studied the interactions of FUS with RNA, which can trigger FUS condensation under lab conditions when the molecules are combined at a one-to-one ratio.

Given the similarity of PAR and RNA structures, and other lines of evidence, both Myong and Leung wanted to see if PAR could play a role in FUS condensates.

“At the molecular level, at biochemical level, at condensate level, we had tools to measure fluidity and fusion, so we had all the assays setup for FUS, so it was easy for us to then apply PAR,” said Myong.

Those assays require molecules that can be tagged with specific modifications.

“we have just developed techniques to label and visualize PAR, so it was perfect timing to test this idea,” said Leung.

A fortuitous mistake pointed the way to surprising results: after one of the lead authors combined the purified PAR and FUS and saw FUS condensation, he checked his notes and found the concentration of PAR was a thousand-fold lower than intended.

Myong said that at first that didn’t make sense–RNA couldn’t form condensates at anywhere near as low of concentrations.

“That's the beginning of the titration work,” she said, “okay, let's see if this is real.”

So the student went back and carefully tested different concentrations, and found that the low amount of PAR needed for condensation was real.

“It turns out to be super potent compared to any molecule that has been characterized,” Leung said.

While RNA must be added to FUS at one-to-one ratio to cause condensation, PAR chains of eight or more can cause robust condensation at sub-stoichiometric concentrations of as few one per thousand FUS. This was a first indication that PAR could cause condensation, but in a different way than RNA.

To examine individual interactions, the researchers used a single molecule microscopy technique, creating slides with attached fluorescently labeled PAR or RNA molecules, then adding FUS, labeled with a different tag. Then the researchers watched to see when two tags came into close proximity, across thousands of molecules on a slide. Analyzing the data, they found that FUS-RNA interactions were stable, staying bound for relatively long periods, but PAR-FUS interactions were transient, binding and then releasing in bursts of less than a second.

The researchers also manipulated the condensates after they formed, using enzymes to degrade PAR or RNA, or attaching the PAR and RNA to beads that could be removed. They found that FUS-RNA condensates were only stable for as long as the RNA was in contact with the FUS molecule. But once PAR interacted with FUS and triggered condensation, those condensates not only persisted when the PAR molecules were removed, they could continue to incorporate new FUS molecules.

They also looked at FUS condensation in cells. Instead of adding free chains of PAR, they manipulated enzymes that add PAR to proteins, and found that reducing the activity of one enzyme, PARP5a, reduced the number and size of FUS condensates.

Together the paper’s results provide clues that may connect the roles of PAR and FUS in some types of neurodegeneration. The results open up many questions that both Leung and Myong are interested in answering, from what mechanism is involved in PAR-triggered FUS condensation, if and how it connects to neurodegeneration, and whether PAR has similar effects on other proteins.

Leung said that a core part of the collaboration was mentoring, brainstorming collectively, and providing feedback and support for the students both labs working on the project. “It's really a team effort,” he said.

The two labs began collaborating in 2017, which was sparked by a Johns Hopkins Discovery Award along with Marc Greenberg, PhD, Vernon K. Krieble professor of Chemistry, who helped develop a complementary technique to globally identify PAR binders like FUS.

Read the full paper to find out more about the research, including the impact of FUS mutations on condensation and what happens when PAR, RNA and FUS all interact together.