Eukaryotic cells are complex and dynamic, and must constantly respond to changing conditions. One way cells respond is by the adding or removing chains of ADP-ribose to proteins, which can trigger a range of activities and recruit other proteins.

Anthony K. L. Leung, PhD, associate professor in Biochemistry and Molecular Biology, has long studied ADP-ribosylation and the activities it controls, including biomolecular condensates, distinct concentrations of specific molecules like proteins and RNA in cells that are not contained by membrane-bound compartments. Researchers have found that some key cell processes and a number of diseases are connected to condensates.

Though researchers have started to understand the mechanisms that assemble and disassemble condensates, “one major key question in the field that remains unanswered is how the composition of biomolecular condensates is regulated,” said Leung. In two recent papers, his lab is filling in some answers.

In 2011 Leung showed that ADP-ribosylation is required for the assembly of a kind of biomolecular condensate called stress granules, but this and similar research was limited to in vitro experiments, he said.

His lab’s recent paper in PNAS, however, examines these connections during viral infections, in collaboration with Diane Griffin, PhD, a professor in Molecular Microbiology and Immunology and expert in mosquito-borne alphaviruses. 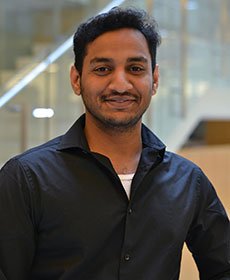 Aravinth Jayabalan, PhD, a postdoctoral fellow in Leung’s lab and the paper’s lead author, explained that viruses commonly target stress granules, but the reason for this targeting and the mechanism behind it are unclear.

In alphaviruses, nonstructural protein 3, or nsP3, was known to suppress stress granules. nsP3 has a domain that binds to a protein involved in stress granule formation, as well as an enzymatically active macrodomain that removes ADP-ribose from proteins.

“Because ADP-ribosylation is critical for the formation of stress granules, I thought that disrupting the nsP3’s enzymatic activity would make the viruses less efficient to disassemble stress granules,” said Jayabalan. 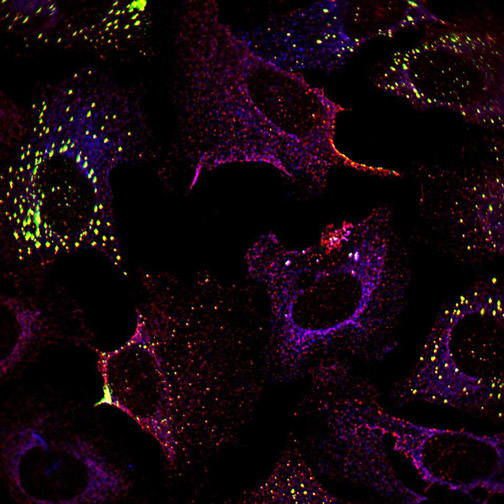 Jayabalan examined what happened to cultured cells expressing individual domains of nsP3. As he predicted, the macrodomain, but not the other domains, was required to suppress stress granules.

Chikungunya viruses need the macrodomain activity to infect cells, so to examine the role during an infection, Jayabalan used mutated viruses with reduced macrodomain activity, and found they disassembled the stress granules significantly more slowly than the wild-type virus.

“In this physiological context, we discovered that the regulation of ADP-ribosylation is critical for remodeling the composition of stress granules,” said Leung, explaining that the remodeled nsP3 condensates contain the RNA-binding proteins of stress granules, but not the translation factors, which the virus may need to make proteins later in infection.

In the second paper in JACS, Leung’s lab and collaborators took a cellular census of these proteins that interact with poly (ADP-ribose), or PAR, tags. 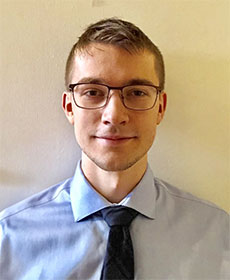 “We are interested in ADP-ribosylation because of its relevance to several public health challenges, like viral infection and cancer,” said PhD student Morgan Dasovich, the lead author of the paper. He explained PAR is known to have a role in DNA repair, but research shows it may be involved in other functions. “So in this study we asked, ‘What types of proteins interact with poly(ADP-ribose)?’”

To figure that out, the researchers created a new chemical probe, PARprolink.

PARprolink has three main components that work like a fishing pole when added to cell extracts. The PAR chain region is the bait for PAR-binding proteins. A crosslinker acts as the hook: when exposed to UV light, it will link to a nearby protein. When the PARprolink molecules are pulled out by their biotin handles, the now-linked protein will come along with it. The captured proteins are then identified, creating a census of PAR-binding protein candidates.

Dasovich and colleagues found hundreds of these PAR-binding candidates, and analyzed what activities they were involved in. As expected from past research, many were involved in DNA repair pathways.

“Since drugs that target poly(ADP-ribose) are already used to treat some types of cancers, it would be pretty cool if those drugs could be repurposed to help people with neurodegenerative disease,” said Dasovich.

The census also included some known components of biomolecular condensates, and the candidates were more likely than average proteins to have low-complexity sequences, a characteristic known to be important for condensate formation.

Leung said he’s excited about the discoveries showing PAR involvement in condensate regulation, because as PAR is already known to be a viable drug target, these findings open up new avenues of investigation for treatments for diseases linked to problems in regulating condensates.