“We are really interested in knowing how cells respond to their environment, and then carry out, in response to the different environments, their functions,” explained Cai, PhD.

But to tease that apart, Cai combines advanced microscopy techniques with genomics and proteomics techniques.

“Dr. Cai’s technologies and innovative questions will infuse new vitality and energy to several of our current research programs and she will serve as an exceptional role model and leader in the School of Public Health,” said E.V. McCollum Chair Ashani Weeraratna.

For some time, Cai has focused on the Yes-associate protein, or YAP, a master sensor of mechanical signals in a cell.

“Instead of just chemical ligands it can feel the stretches or crowding of their environment,” she said, explaining that it carries that information to the nucleus, initiating a diverse transcription program. YAP is also a master oncoprotein that is upregulated in multiple types of cancers.

Her lab uses advanced imaging techniques to study these processes, including live-cell imaging and a 3D super-resolution technique called ATAC-PALM, developed by Zhe Liu, PhD, one of her mentors at the Howard Hughes Medical Institute’s Janelia Research Campus, where she was a postdoc prior to joining BMB.

As a postdoc, she used live cell imaging to find where YAP protein went in cells, and revealed an interesting pattern: YAP proteins came together in liquid-like droplets. 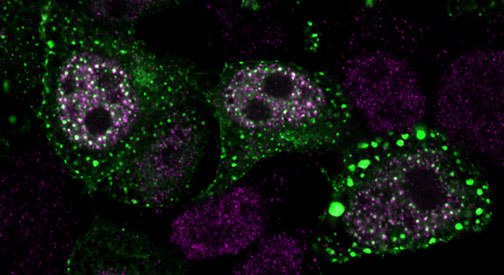 “They're just fascinating droplets that you can see in the cell, just like when you try to mix vinegar and oil in a salad dressing—you see them separating out,” she said, “and we see those proteins separating out and lighting up the cell like a lava lamp.”

These droplets are a type of phase separated condensates, hubs of proteins and other molecules in cells that aren’t bound by membranes. And they aren’t just beautiful, Cai said, they’re functional units where these concentrated proteins can carry out reactions.

YAP is an unusual protein because it is almost completely disordered. Cai explained that the traditional view is that to function, a protein needs to fold into a fixed structure, but disordered domains don’t form fixed structures, remaining more wiggly. Though around 70% of proteins have these domains, which are a common location for cancer mutations, Cai said that how they function is still not clear.

She and her colleagues found that for YAP, those disordered domains weakly interact with each other, cause them to come together in liquid-like condensates where the proteins can work together to function.

Cai wants to understand what mediates those weak interactions, and further explore how YAP and other disordered proteins function.

“I am interested in studying various condensates in the context of kidney cancer, those formed by transcription factors and those by fusion oncoproteins,” said Cai. “I would like to know how they form, and how they can be targeted in treating the kidney cancers.”

Here in BMB, she’s continuing her advanced microscopy work, using the School of Medicine’s Microscope Facility for ATAC-PALM work, and a new Zeiss 900 Airyscan microscope in her lab here in BMB for live-cell super resolution imaging. She said she’s looking forward to working with other researchers here at Johns Hopkins working on chromatin biology, transcriptional regulation, and cancer, and is already collaborating with Assistant Professor Jennifer Kavran, PhD, as the Hippo pathway that the Kavran lab focuses is a regulator of YAP.

“Dr. Cai is highly collaborative, incorporating collaborators with diverse expertise such as mathematical modeling and chemical engineering,” said Weeraratna. “I am excited to see the synergy that her research program will produce in the rich scientific environment here.”

Cai might be BMB’s newest assistant professor, but she’s not new to Johns Hopkins. She did her PhD in the Biological Chemistry program in the School of Medicine, and is happy to be back in what she described as a great scientific environment, with many opportunities to connect with others in the Johns Hopkins community.

“BMB feels like a family to me and there are just so many interactions between not only the PIs, but also among the trainees, the PhD students, master students, and the postdocs,” Cai said.

The Cai lab space is filling in, not just with equipment but also the first members of the lab, a postdoc, and an ScM student. And Cai, who recently received a five-year NIH R35 MIRA grant, is looking forward to more growth in the coming year.

“Now I have the lab up and running, and funding in place, I am very interested in recruiting more students to my lab and building a nurturing and productive lab environment,” she said.