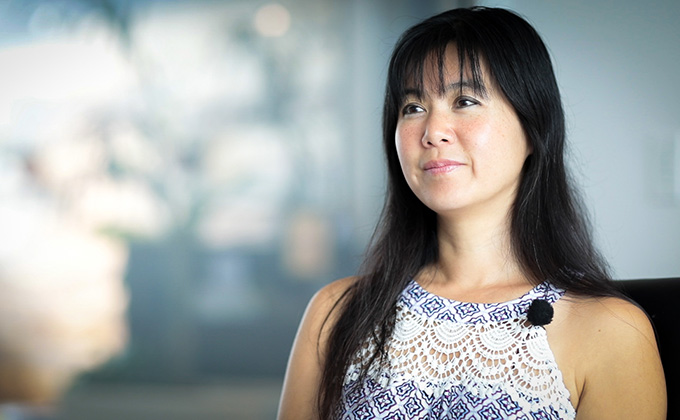 Colleen Cutcliffe, PhD ’04, is the CEO and cofounder of Pendulum, a microbiome start-up focusing on medical probiotics that has just brought its first product to the market. While her days look very different than when she was a Biochemistry and Molecular Biology PhD student working in the lab of Professor Cecile Pickart, PhD, her experiences in the department and in the School of Public Health connect to what she and her company are doing today.

When Cutcliffe started in BMB in 1998, Pickart’s lab was the one all the students wanted to join, she said.

“She was a world-class scientist, extremely well known and well respected both in the ubiquitin field as well as the cancer field,” said Cutcliffe, but the reason Pickart’s lab was so popular was her mentorship: how she took the time to work with students to help them grow, be independent, and tackle challenges.

In Pickart’s lab, Cutcliffe studied the role of the ubiquitin pathway in DNA repair and how it could be applied to reducing skin cancer. Though Cutcliffe doesn’t work in the lab these days, she does see connections from her research to Pendulum’s work in developing medical probiotics that target specific diseases, and has recently bought its first product to the market, Pendulum Glucose Control, a probiotic targeted for people with Type 2 diabetes.

“We use DNA sequencing to identify novel insights in the microbiome, and we use those novel insights to develop interventions,” she said. Cutcliffe explained that after identifying strains from DNA sequencing, the company isolated and characterized them, and then ran them in clinical trials.

“So what we have is a product that has the efficacy of a drug but the safety of a probiotic,” said Cutcliffe.

She said that the decision to bring the product directly to consumers rather than the more traditional pharmaceutical path was rooted in public health concepts she learned at JHSPH.

Cutcliffe explained that with pharmaceutical products, the data and communications materials are primarily aimed at physicians, which can lead to products being developed without considering the users, for example creating a drug that needs to be injected multiple times a day, which few people want to do.

“If you start at the beginning with the consumer in mind, the person who’s actually going to be benefiting from this, you create a very different kind of product,” she said.

In contrast, in the School of Public Health, the focus was on the patients.

“By bringing products directly to consumers we’ve actually put the patient literally first,” she said, noting that the company ran clinical trials to show efficacy and collect data as they would for a pharmaceutical drug, but the audience in mind was the patient instead of a physician. She described the result as a product that users can understand the benefits of, by seeing the impact on their A1C levels, and that fits into a person’s life, as a daily pill.

“I think the only way we’re going to solve these chronic illnesses is if we really put the patient first and we say ‘I have to create a product that not only has efficacy but really can be integrated into this person’s lifestyle.’ And that is I think both the opportunity and the challenge,” said Cutcliffe

She also sees a similarity between Johns Hopkins, and the School of Public Health in particular, with Pendulum in their sense of a mission-driven community.

That was part of what drew her to BMB when she was interviewing for graduate school – a sense she got from speaking to everyone from students to experienced faculty.

“It was sort of the same drumbeat of: if you come here you will get to interact with the best of the best, and we are all here to collaborate and work together and to build amazing, novel insights for the world. And it was inspiring,” she said, “and I did not have that same feeling at some of the other places that I interviewed at.”

She thought a large part of that difference was that BMB is in the School of Public Health, while other programs she applied to were generally in medical schools.

Fostering that sense of community and culture at Pendulum is something she works at.

“One of the things I’m most proud of at Pendulum is our company culture and the fact that every person in there is not only super smart and amazing in their field, but also incredibly collaborative and wants to work together in teams and wants to help people,” she said. “That doesn’t happen by accident. And it’s something that takes daily work.”

Cutcliffe still maintains connections to BMB. Though Pickart died in 2006, Cutcliffe keeps in touch with some of the BMB faculty that made a difference for her and enjoys seeing them when she visits Baltimore.

She’s also involved with the Johns Hopkins Technology Ventures and their entrepreneurial and innovation programs, something she shared about in her the School of Public Health’s Donor Impact profile, Learning How To Let Go.

Cutcliffe also spoke with JHTV about how her science training at Johns Hopkins prepared her for entrepreneurship.

“I think it’s awesome that Hopkins is trying to create an infrastructure that allows students and postdocs to think about taking their ideas and translate them into products that can be commercialized,” she said. “That didn’t exist when I was there, and so I’m excited to be able to meet some of these really smart and innovative and brave entrepreneurs that are coming out of Hopkins.”

In fact, Cutcliffe recently signed The Hopkins Founders’ Pledge, a mutual commitment between select entrepreneur alumni and the university for founders to give back in the form of promised time and money and for Johns Hopkins to provide support, networks, and campus resources for those alumni.