Our Faculty are on Fire!

BIOSTATISTICS FACULTY ACROSS THE SPECTRUM ARE BEING HONORED FOR THEIR CONTRIBUTIONS TO THE GREATER ACADEMIC COMMUNITY. CHECK OUT SOME OF THE RECENT MAJOR HONORS AND AWARDS THEY HAVE RECEIVED!

This year, Biostatistics’ own Associate Professor, Roger Peng was selected as the Spiegelman Award recipient. Dr. Peng’s work focuses on the development and application of advanced statistical methods to the area of environmental health. For the past ten years, he has continued the Department’s leadership in the area of air pollution epidemiology by developing new statistical approaches for quantifying the evidence of outdoor air pollution health effects. His contributions to the literature have been cited by the U.S. Environmental Protection Agency’s integrated science assessments, which are used to guide the agency’s development of national ambient air quality standards. Dr. Peng has also conducted extensive research on the effects of the indoor environment on respiratory morbidity, developing statistical approaches for analyzing data from environmental randomized controlled trials. In addition to his research, Dr. Peng is dedicated to teaching statistics and data science to a broad audience. As part of this effort, he has co-developed (with Department colleagues Jeff Leek and Brian Caffo) the massively popular Johns Hopkins Data Science Specialization, a ten online-course sequence that has been taken by over 4 million people since it launched in 2014.

Check out the other honors and awards here.

JOIN US IN WELCOMING OUR NEW ASSISTANT PROFESSORS, NI ZHAO AND ABHIRUP DATTA!

Her research interest lies in the development and application of statistical methodology for high-dimensional data that are collected in biomedical and public health studies, particularly for application to problems in the emerging “omics” field, including genomics, epigenomics, metagenomics, etc. Collaborations with biomedical researchers are another essential part of Dr. Zhao’s research program. Her broader scientific research interests in areas pertaining to cancer, environmental sciences, epidemiology and other biomedical and substantive disciplines.

Abhirup Datta obtained his PhD in Biostatistics from University of Minnesota, Twin Cities, advised by Dr. Hui Zou; he also holds a master's degree in Statistics from the Indian Statistical Institute.

We are very excited to welcome Drs. Zhao and Datta to the department.

BIOSTATISTICS WILL BE GETTING A HEAD START TO ITS OWN CENTENNIAL CELEBRATIONS WITH A SYMPOSIUM AND “BIRTHDAY BASH” ON SATURDAY, JULY 29, 2017 - JUST PRIOR TO THE JOINT STATISTICAL MEETINGS. 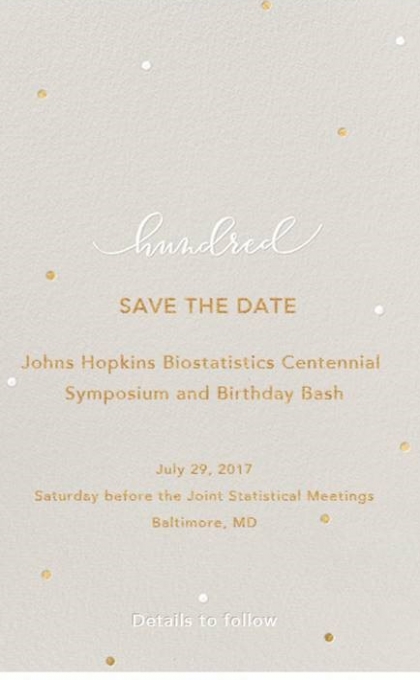 Attendance was at a very cozy 74 guests, with a total of six chili submissions - equally split between meat and vegetarian selections.

As per tradition, there were also several non-chili dishes contributed by other students, postdocs and faculty to make the potluck-style event a well-rounded gastronomic affair.

Although competition was stiff, there were three winners chosen by a panel of student and faculty judges: Associate Professor, Michael Rosenblum won Best Vegetarian Chili and student duo, Jacob Fiksel and Lamar Hunt, won Best Meat Chili. The winners received the coveted trophies for their respective categories; the trophies will be on display in their offices until next year’s showdown.