Bacterial infections have been linked to the development of colon cancer, but the connections to short-term rather than persistent infections has not been clear. Now, the lab of Fengyi Wan, PhD, associate professor in Biochemistry and Molecular Biology, has reported in Cancer Discovery that a specific protein, UshA, secreted by the pathogen Citrobacter rodentium during transient infections in mice causes genomic DNA damage in host cells and is associated with accelerated colon tumorigenesis. 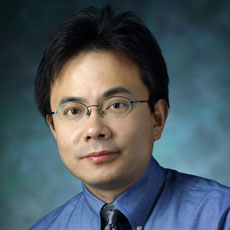 “The beauty of symmetry promoted this line of research,” he said, “and the technical challenge in experimentally proving ‘hit and run’ theory in bacterially driven cancer development” guided the design.

“Hit and run” transient diarrheal diseases such as those caused by enteropathogenic and enterohemorrhagic E. coli, known as EPEC and EHEC, are common, so understanding any potential connections to colon cancer is important, especially as the rates of colon cancer are rising globally.

The Wan lab began by testing whether transient infections could cause cancer-promoting DNA damage in a mouse model of infection using C. rodentium, which, like EPEC and EHEC, is an attaching/effacing pathogen, but unlike those human pathogens, it can infect mice.

They found that C. rodentium infections caused DNA damage to the host cells, but only if the bacteria had a functional Type 3 Secretion System, which allows the bacteria to inject proteins directly into host cells.

“The simplest explanation here is that bacterially secreted proteins damage genomic DNA in host cells, then how to identify such proteins?” Yue (Harry) Liu, PhD ’21, MHS ‘21, lead author of the paper, said. “We screened extensively and eventually zeroed in on a T3SS-injected protein, UshA, that accounts for the DNA damage.” 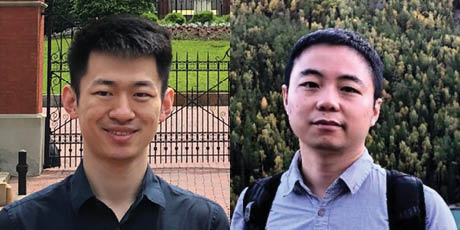 Liu (left), now a postdoctoral scholar in the Department of Biochemistry and Biophysics at UCSF, co-led this research as a PhD student in the Wan lab, along with former Wan lab postdoctoral fellow Kai Fu, PhD (right), who is now a professor of general surgery at Xiangya Hospital, Central South University, in China.

To look at the impact of UshA and infection on later colon cancer development, the researchers infected mice that are prone to developing colon tumors with different strains of C. rodentium. All the mice completely cleared the infections in just a few weeks, but at three months post-infection, mice exposed to UshA-producing C. rodentium had higher levels of colon tumors than mice that were not infected, or infected with engineered C. rodentium that didn’t make UshA.

The human pathogens EPEC and EHEC also have versions of UshA and the T3SS to inject it into host cells, and the Wan lab showed that they cause DNA damage to cultured cells, similar to C. rodentium. This study suggests that there may be a connection between these common, short-term, diarrheal illnesses and colon cancer in humans, but confirming those connections will require further research—and not just in the lab.

“We hope this study will motivate other researchers to do epidemiological studies to investigate this potential link between transient diarrheal infections and colon cancer development,” said Wan in a press release from the School of Public Health.

In addition to connecting this pre-clinical work with broader epidemiological research, Wan said he plans continue to study the underlying mechanisms of process and also screen for compounds that inhibit UshA.

Learn more from the School of Public Health’s press release, or get all the details from the paper, published in Cancer Discovery.