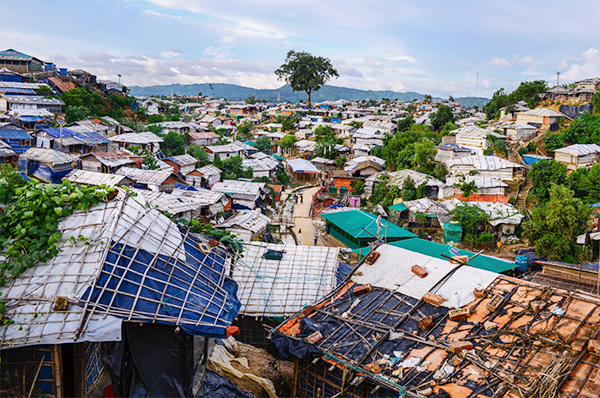 A large-scale COVID-19 outbreak is likely after a single introduction of the virus into a Bangladesh refugee camp if left unchecked, finds a new modeling study led by researchers in the Department of International Health and the Infectious Disease Dynamics Group at the Johns Hopkins Bloomberg School of Public Health. Researchers looked at potential outbreak scenarios in the Kutupalong-Balukhali Expansion Site of the Cox’s Bazar district of Bangladesh. The study found that between 70% and 98% of the population could be expected to be infected within the first year after an initial outbreak, with hospitalization needs likely exceeding the current capacity of 340 beds after 55 to 136 days.

The study was published on June 16 in PLOS Medicine.

Bangladesh is host to almost 1 million Rohingya refugees from Myanmar, with 600,000 of them concentrated in the Kutupalong-Balukhali Expansion Site. With over 46,000 people per square kilometer, the Expansion Site could qualify as one of the densest cities on Earth. The majority of families share a single room, and only half of the households have access to sufficient water to meet their needs. All water and hygiene facilities are public and overcrowded. Due to poor access to water and sanitation, limited health care capacity, and the high density of the Expansion Site, the forcibly displaced populations that live there are particularly vulnerable to COVID-19.

Researchers used a dynamic model of severe acute respiratory syndrome coronavirus 2 (SARS-CoV-2) to conduct simulations of how a COVID-19 outbreak could spread at the Expansion Site using three transmission scenarios—low, moderate, and high. Simulations using the low-transmission scenario resulted in a large-scale outbreak 61% of the time. The likelihood increased to 80% and 92% in the moderate- and high-transmission scenarios, respectively. The simulations also estimated the hospitalizations, deaths, and health care needs expected, adjusting for the age distribution of the population at the Expansion Site.

“A COVID-19 epidemic in a refugee settlement may have profound consequences, requiring large increases in health care capacity and infrastructure that may exceed what is currently feasible,” says Paul Spiegel, MD, MPH '96, a co-lead author of the study and director of the Johns Hopkins Center for Humanitarian Health.

Many of the approaches currently used to prevent and respond to COVID-19—such as social distancing and frequent handwashing—are not practical in humanitarian settings. The researchers suggest that plans to prevent and contain COVID-19 in the Kutupalong-Balukhali Expansion Site and other similar settings should consider novel and radical strategies to reduce infectious contacts and fill health worker gaps, while recognizing that refugees may not have access to national health systems. The researchers also conclude that detailed and realistic planning for the worst-case scenario should begin now.

A preprint of this modeling study was published on March 26. At the time, not a single COVID-19 case had been diagnosed in the camp. The first case was diagnosed on May 14 and the first death recorded on May 31.1 As of June 10, there were 35 confirmed cases among refugees living in the Expansion Site and more than 1,000 among Bangladeshi nationals living in Cox’s Bazar.2 This aligns with the three study scenarios that all showed limited numbers of infections and few if any hospitalizations or deaths in the first month after one infectious case.

The potential impact of COVID-19 in refugee camps in Bangladesh and beyond: A modeling study was written by Shaun Truelove, Orit Abrahim, Chiara Altare, Stephen A. Lauer, Krya H. Grantz, Andrew S. Azman, and Paul Spiegel.

The study was funded by the Office of Foreign Disaster Assistance (OFDA), USAID, and the Centers for Disease Control and Prevention (CDC).