Adverse pregnancy outcomes, such as a miscarriage, stillbirth or neonatal death (death within the first 30 days of infancy), are more likely when preceded by an outcome of the same type in combination with a short interval between outcomes, a new study finds. The study was led by researchers from the International Center for Maternal and Newborn Health (ICMNH) at the Johns Hopkins Bloomberg School of Public Health.

The study, published in February 2019 by BMC Pregnancy and Childbirth, used self-reported data from mothers in the Projahnmo I study in rural Bangladesh. Projahnmo I is a community-based study in the Sylhet district of Bangladesh aimed at evaluating the effects of an integrative maternal and newborn care program on neonatal mortality. 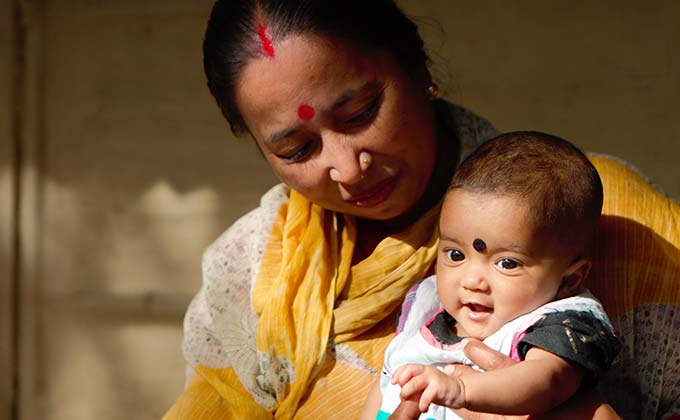 Across all intervals, negative outcomes were more likely when preceded by an outcome of the same type, whether it be miscarriage, stillbirth or neonatal death, the study found. Inter-outcome intervals (IOI) of less than 6 months and 7–14 months were associated with an increased risk of an adverse outcome, as compared to IOIs of 27–50 months. The data suggests that in rural northeast Bangladesh, the 6-month pregnancy interval following any of three adverse events was associated with the highest risk of a miscarriage in the next pregnancy.

“This is an important contribution to the literature because there is a paucity of data on this subject from settings with poor health care services. Even though birth spacing patterns have improved in general, some areas are still lagging behind,” says Dr. Bareng Nonyane, lead author of the study and associate scientist in the Department of International Health at the Bloomberg School.

The study examined 64,897 outcomes from 33,495 mothers in Sylhet, a rural area of Bangladesh that has been lagging behind the rest of the country with respect to improvements in birth-spacing.

Previous studies examining short and long intervals between pregnancies and the resulting pregnancy outcomes have generally focused on the period after live births, and have found an increased risk of poor outcomes following a short interval. This study sought to address a key gap in the literature by focusing on the effects of intervals after adverse pregnancy outcomes on the risk of another adverse outcome in a subsequent pregnancy.

Going forward, incorporating advice into family planning programs that suggests waiting 6 months following an adverse pregnancy outcome before conceiving again should be considered; however, more research is needed in low-income countries on the benefits of waiting. It should also be recognized that in some areas of rural Bangladesh, women are not always able to make their own decisions regarding family planning; therefore, interventions that consider gender inequalities and cultural and societal norms are needed. The full study can be found here.

Pregnancy intervals after stillbirth, neonatal death and spontaneous abortion and the risk of an adverse outcome in the next pregnancy in rural Bangladesh was written by Bareng A. S. Nonyane, Maureen Norton, Nazma Begum, Rasheduzzaman M. Shah, Dipak K. Mitra, Gary L. Darmstadt, Abdullah H. Baqui and for the Projahnmo Study Group in Bangladesh

Projahnmo I was funded by United States Agency for International Development, as well as the Saving Newborn Lives program of Save the Children (US) through a grant from the Bill & Melinda Gates Foundation.