Safe Consumption Spaces Would Be Welcomed By High-Risk Opioid Users

A large majority of people who use heroin and fentanyl would be willing to use safe consumption spaces where they could obtain sterile syringes and have medical support in case of overdose, suggests a study led by researchers at the Johns Hopkins Bloomberg School of Public Health.

In the study, published June 5 in the Journal of Urban Health, the researchers surveyed 326 users of heroin, fentanyl and illicit opioid pills in Baltimore, Boston and Providence, cities hard-hit by America’s ongoing opioid overdose epidemic. About 77 percent of participants reported a willingness to use safe consumption spaces—sanctioned locations which have been set up and evaluated in other countries such as Canada and Australia but not yet in the U.S. Willingness to use safe consumption spaces was even higher, at 84 percent, among people who relied on public spaces such as streets, parks and abandoned buildings to use drugs.

“On the whole, we found a strong willingness to use safe consumption spaces. This is important because often the voices of people who use drugs are not always included in policy debates or in the implementation of public health interventions,” says study lead author Ju Nyeong Park, PhD, MHS, an assistant scientist in the Department of Health, Behavior and Society at the Bloomberg School.

They have been in use abroad since the mid-1980s and now number more than 100 facilities in 12 countries. Studies indicate that the public health benefits are many, as they greatly reduce overdose deaths, greatly reduce transmission of HIV and Hepatitis B and C viruses via needle-sharing, help keep users out of parks and other public places and offer good opportunities for steering users to treatment.

There are currently no legal safe consumption spaces in the U.S., however, due to a federal law—known as the “crack house statute”—that creates a serious criminal liability for anyone knowingly connected with a property purposed for illegal drug use. Concerns about safe consumption spaces encouraging illegal drug use and potentially blighting the neighborhoods where they are situated also have led to local opposition in some cases. But the severity of the current opioid-use epidemic in the U.S. —opioids were involved in most of the 70,000-plus drug overdose deaths in 2017—is such that safe consumption spaces are now discussed as viable options among policymakers in some state and local governments. Public health researchers also have been weighing in with studies.

“The study documents that people who use drugs are motivated to be safe and take precautions to reduce their exposure to harm,” says Susan Sherman, PhD, professor in the Bloomberg School’s Department of Health, Behavior and Society and the study’s senior investigator. “We can use this evidence to holistically address the opioid epidemic.”

Park, Sherman and their colleagues, working through street recruitment and local syringe service programs, contacted and obtained survey data from a diverse sample of 326 people in Baltimore, Boston and Providence who said they had used opioids non-medically in the previous 30 days. Most reported using injected drugs—mostly heroin. Almost 70 percent were homeless, and 60 percent reported habitually using drugs in public or semi-public places. More than a third of participants reported having experienced an overdose in the past six months. About 73 percent reported recent use of a drug they suspected had contained fentanyl, a synthetic opioid that is much more potent—and thus has higher overdose potential—than heroin.

When participants were asked about things that could make it harder for them to use a safe consumption space, the factors they cited most frequently were fear of arrest (38 percent) and privacy concerns (36 percent).

All in all, participants’ broad willingness to use safe consumption spaces suggests that such facilities, if available, would provide a viable alternative to using drugs on the streets. “It’s encouraging because even though these are people engaging in very high-risk behaviors in very different contexts within these three cities, they were willing to use this harm-reduction intervention,” Park says.

Support for the research was provided by the Bloomberg American Health Initiative and the National Institutes of Health (P20GM125507; K01DA046234). 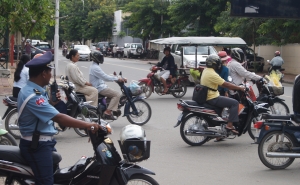