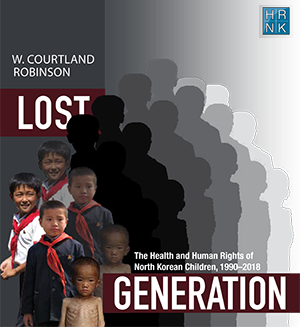 The Committee for Human Rights in North Korea (HRNK) published a new study today on the health and human rights conditions of North Korean children. The report, entitled, “Lost Generation: The Health and Human Rights of North Korean Children, 1990-2018,” combines recent interviews with North Korean refugees and asylum seekers in China and South Korea with a systematic literature review and synthesis of more than seven different studies over the past three decades.

“Based on the evidence, we’ve been able to conclude that North Korean state’s gross failure to protect the basic health, welfare and well-being of the population—including the children—constitutes more than a violation of elementary normative principles but a violation of core international human rights treaty obligations,” says W. Courtland Robinson, PhD, the report’s lead author and associate professor of International Health at the Johns Hopkins Bloomberg School of Public Health. Robinson and his study team reviewed more than 200 English and Korean articles and reports, analyzed qualitative data from 61 interviews conducted in China and South Korea in 2016 for HRNK, and reviewed and summarized 7 previous studies carried out on the China-North Korea border beginning in 1998.

The analysis found, for example, that the education system has deteriorated dramatically, with children performing forced labor for 11 hours a day or longer as an “extension of learning.” Malaria, once practically eradicated, has started to re-emerge as a serious threat to public health of North Koreans. “Given all we know from the data from inside North Korea, the health and human rights conditions of children remain dire, and the situation of North Korea child refugees and migrants is nothing short of calamitous,” Robinson adds.  He notes, however, that the picture is incomplete due to the limited access given to outside organizations and observers and to some of the flawed, incomplete, and possibly manipulated data provided.

The report also documents the circumstances and challenges of North Korean migrants and refugees in South Korea and other countries and concludes with detailed recommendations to the two Koreas, China, the United States, and the international community.

Released at a special event on Capitol Hill earlier today, the complete report can be downloaded here.