“I charge you to focus on what you can use from what you learned and then simply do your best at it .… The product of the time we spend at Hopkins is us—it’s you, it’s me, it’s how we grow.” —Kenai McFadden, MSPH ’19, Co-Vice President of Professional Development and Academic Honors of the Student Assembly

The Bloomberg School’s largest class to date—962 students from 50 countries—saw more than 645 of its graduates walk across the stage at the Convocation ceremony on May 21.

This year’s event marked the 100th anniversary of the School’s first graduating class, consisting of just one person: John A. Ferrell, MD, who received a DrPH on June 24, 1919. Ferrell served as the U.S. director of the Rockefeller International Health Board, played a key role in the Rockefeller Foundation’s hookworm control program in the American South and was president of APHA in 1933. 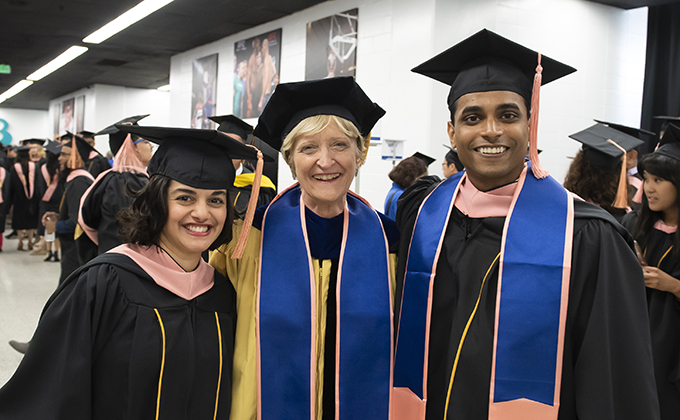 Dean Ellen J. MacKenzie, PhD ’79, MSc ’75 opened the ceremony with remarks in which she recognized faculty and families before telling students that “what you do moving forward will make a difference in human health and human lives.” MacKenzie referenced the School’s strategic plan and its five pillars, which she suggested graduates could use as a framework for their own “personal strategic plan.”

Dean MacKenzie closed with a charge: “First, have a plan to change the world. Then, make it happen!”

Journalist and author Laurie Garrett delivered the keynote speech and, as Dean MacKenzie had cautioned in her introduction, it was “not your typical, light-hearted commencement address.” 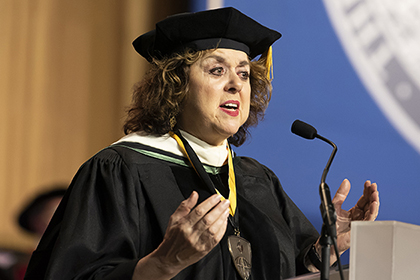 Garrett encouraged graduates to “think horizontally, not vertically” about the challenges facing public health. The vertical, methodical approach of “laying out a hypothesis and drilling down deeply for evidence,” she explained, will not break through the public’s “horizontal” life which is “immersed in politics, sociology, economics, jobs, businesses, wars, family life, climate change … Every individual is careening off hundreds of elements of life every minute of every day.”

Garrett then laid out the bad news: Public health successes hard won over more than a century of concerted, global efforts are now imminently threatened by forces such as crumbling globalization and rising anti-government sentiments.

“Today we face, disunited, two sets of enormous challenges: erosion of our prior victories and all new threats,” Garrett said, noting that a heating planet, antimicrobial resistance and pandemic influenza are “harder to combat without global solidarity.”

The good news, she concluded, is that for this cohort of public health graduates, “denial is not an option.”

“You are the completely cyber-connected, multitasking, climate-change-believing innovators. You will use horizontal thinking to link the classic paradigms of public health that you’ve been well taught here at Hopkins to solve crises. You will toss aside tired, failed rules and practices, generating bold new initiatives. You will dream of … a clean, green, healthy world of universal access to health for all, affordable medicines, clean drinking water, safe food—you will dream of it and you will fight for it.”

Dean MacKenzie honored Garrett with the Dean’s Medal, the highest recognition the School confers on public health leaders, saying “Laurie Garrett has long been on the forefront of global health issues and emerging infectious diseases. She’s rigorous. She gets the science right. She uses it to change the world for the good.” 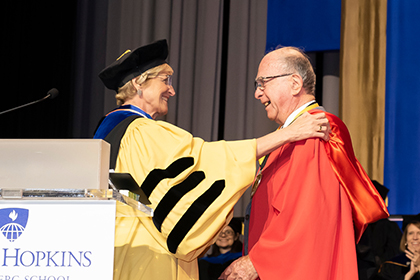 Dean MacKenzie also presented the Ernest Lyman Stebbins Medal, the highest tribute the School can pay to a faculty member for exceptional contributions to the development of educational programs throughout the School, to Clive Shiff, PhD, professor in Molecular Microbiology and Immunology.

121 doctoral and 841 master’s degrees were among those conferred to a class that included 263 international students.