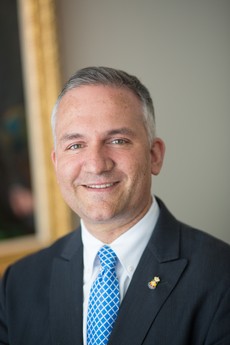 Developed through a collaboration between the Bloomberg School, mPower Social Enterprises and the Bangladesh Ministry of Health and Family Welfare, mCARE was first pilot-tested in Gaibandha District, Bangladesh, where more than 70 percent of births occur at home and a skilled birth attendant attends fewer than 20 percent of home deliveries. In the implementation arm of the study, covering over 600 pregnancies, the proportion of pregnant women receiving antenatal care (ANC) visits increased threefold (from 27 percent to 79 percent); postnatal care (PNC) rates went from 45 percent to 75 percent. The study also showed early indications of improvements in infant survival and decreases in miscarriages.

A frontline health worker meets with a client in Gaibandha District,
Bangladesh as part of the mCARE trial 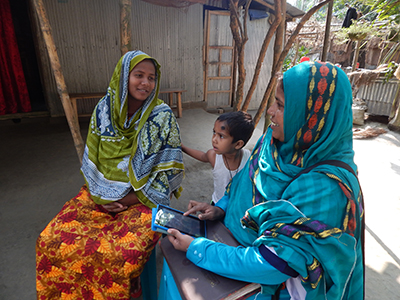 This new funding from Johnson & Johnson will help expand mCARE’s coverage to more than 12,000 pregnant women and 6,000 newborns in Gaibandha District, working in close partnership with the Bangladesh Ministry of Health and Family Welfare, mPower Social Enterprises and ONA. It will also allow Labrique’s team to work with partners to test new innovations that address performance and coverage issues identified in the first years of the trial. Supervisor shortages, for example, are persistent and frustrating—for both the health system and the workers on the ground. His team will focus on developing tools to help workers better manage their own assigned tasks as well as strengthening managers’ ability to identify and support workers who need help the most. Successfully managing issues acutely and chronically experienced in under-resourced and rural areas such as Gaibandha is an important step towards national, and eventually, regional scale-up of mCARE.

mCARE operates on the OpenSRP platform, an open-source mobile technology supported by the WHO; this standards-based platform is being rapidly adopted by government partners around the globe. Once an FHW’s pregnant clients are registered in the system, workers receive daily work schedules. The digital platform also guides FHWs through steps of interaction with patients, ensuring that essential services are included across the ANC and PNC periods. The system captures directly entered service records and provides supervisors detailed information on worker performance and geographical gaps in coverage. In addition, families get automated text-message reminders about when to seek ANC and PNC.

Labrique is an infectious disease epidemiologist and a globally recognized leader in the application of information and communication technologies to strengthen health systems in resource-limited settings. He is also the founding director of the JHU Global mHealth Initiative which connects faculty and students working on digital health across all divisions of Johns Hopkins.