An Affordable, Attainable Public Health Education at the Bloomberg School 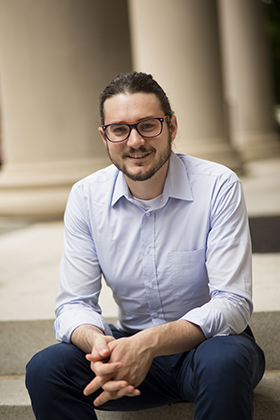 Ron Stokes-Walters wasn’t sure if he was “Hopkins material” at first.

After finishing an undergraduate degree in English Literature at the University of Tennessee, Stokes-Walters joined the Peace Corps for a two-year program, which he extended into a third year. He'd started out teaching English in Northern Benin in a remote area when a cholera outbreak struck the community where he was living. The absence of support received by local health care actors and the spread of fear and rumors about the outbreak's origins prompted Stokes-Walters’s interest in public health, specifically the various cultural and social factors that impact a community's health. In his third year, he shifted to working in a public health position in sanitation where he met people from all over the world working in WASH development in the region.

As he finished his Peace Corps service, Stokes-Walters began thinking about graduate school in public health.

“Obviously, when you search for public health schools, Hopkins is at the top,” he says. “It seemed like every other person I met in the development community where I was serving [in the Peace Corps] was a Bloomberg School alum. But I thought it was out of reach for me at first. I didn’t have a hard science background or a strong base in technical research methodology.”

Then, one of Stokes-Walters’s supervisors, himself an MPH alum, suggested that he look into different programs at the Bloomberg School. This is how Stokes-Walters found the Master of Science in Public Health program in International Health.

Stokes-Walters knew he wanted to pursue work in international health and, through his experience with the Peace Corps, knew he wanted to focus on social and behavioral interventions. He also knew he needed a solid background in areas like biostatistics and epidemiology “without being completely overwhelmed by math,” he jokes.

“I wanted to focus more on research like health behavior change, health communications, things like that,” he recalls. “I was browsing through the different degree programs and found I was qualified for the MSPH.”

Another potential roadblock, he’d assumed, would be cost. But when Stokes-Walters crunched the numbers, Hopkins came up as the most affordable option.

Baltimore has a lower cost of living than other cities with top-rated schools of public health, and the MSPH program to which Stokes-Walters applied required only one year of coursework plus a capstone.

On top of the cost savings incurred by those factors, a friend and alum told Stokes-Walters to look into the master’s tuition scholarship (MTS), which provides eligible students in certain programs a 75 percent tuition discount during the second year of study.

The MTS is a department-dependent scholarship, and requirements vary slightly for each department. Stokes-Walters—who was accepted to the MSPH program in International Health—was able to complete all of his coursework in the first year of the program and then finished the program’s required internship credits in the second year. (For more details about the MTS, please view the department breakdown on the Scholarships page.)

“Every other program I got into was a traditional two-year program where you take classes every single semester,” he says. “In total [at Hopkins], I paid a year and a quarter of tuition rather than two years of tuition plus a higher cost of living.”

But cost savings turned out to be only one benefit of choosing Hopkins. Another plus: the opportunity to conduct field research in a place to which he already had a strong connection.

Stokes-Walters was in the midst of his MSPH in Social and Behavioral Interventions coursework when his mentor, Peter Winch, mentioned a research project in West Africa that might align with his interests. As one of the PI’s for the project, Winch encouraged him to check it out. “‘There’s a way to have it funded, and I think you’d be a good fit for it. You should apply,’” Stokes-Walters remembers Winch telling him.

Eager to get back to working in francophone West Africa, Stokes-Walters applied for the Global Health Established Field Placement project in Guinea and was accepted. Under Winch’s supervision, the team was working in a collaboration led by Helen Keller International’s Guinea country office on a study of the various decision-making processes driving food choices in informal mining communities, with the goal of creating a Behavior Change Communications toolkit and policy recommendations for local actors. 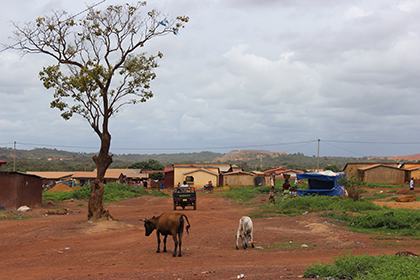 The team was charged with interviewing individuals who, lured by the possibility of better economic prospects, abandoned their farms to go work in the mines. With more reliable paychecks, the former farmers now had money to spend on food—only no one was growing food anymore. What had been an agricultural society was no longer producing its own food.

“They’re not farming anymore so they have money to buy food. But they have to buy food because they aren’t farming anymore,” Stokes-Walters says. “I’m really interested in exploring how that might be affecting some of the choices people are making about the food that they eat and how it might be impacting their nutritional status.” 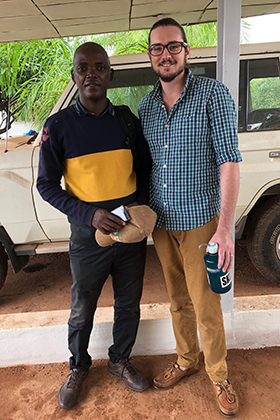 The Guinea research project was focused on how farming-turned-mining community members define and talk about the food they eat, as well as gaining a better understanding of what was available in these communities. Stokes-Walters’s work involved capturing the nuances of language and cultural contexts. In past experiences of implementing behavior campaigns and surveys, he had worked with materials typically created by researchers in Western cities or even a nearby capital, and then translated into French or a local language.

“A lot of stuff gets lost in translation,” he says. “How you phrase something in the local language really impacts the way that it’s understood.”

It is critical that when a “behavior change communication strategy is developed, it’s written in a way that will match up with what people understand about food and about health,” he says.

Stokes-Walters was also thrilled to be back in West Africa. Shortly before Tabaski, the Islamic holiday also known as Eid al-Adha, in August 2018, he and a team of researchers were en route to one of their work sites, an isolated village in Guinea. Just north of Sierra Leone and due west of Mali, Guinea has a thriving mining trade, and communities of miners have popped up around what were traditionally agricultural areas. Stokes-Walters and his team were headed to one of these communities. 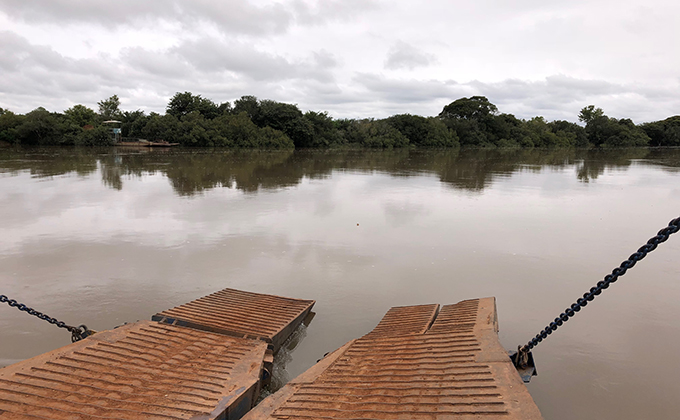 The group first needed to cross the Niger River. It was early evening rush hour at the crossing—locals were herding large groups of livestock in anticipation of Tabaski, when animals are slaughtered for feasts in honor of Ibrahim and his willingness to sacrifice his son. Amid the noise and throngs of people at the crossing, Stokes-Walters found a moment of peace.

“It was one of the few times [during that trip] that I was able to stop my brain a little bit and just appreciate. The river crossing was really pretty and the sun was going down. I thought, ‘I like this. This is what I’m familiar with.’” This was exactly where he wanted to be.

Ron Stokes-Walters graduated with his MSPH in December 2018. His Global Health Established Field Placement had affirmed his desire to work internationally on public health project development and implementation.

“One of the reasons I enjoy this work so much is that there are very concrete things that will be done with the research that directly impact those communities,” he says.

“There’s a Shakespeare quote that’s stuck with me for a while—‘Light, seeking light, doth light of light beguile.’ Research knowledge just for the point of knowledge is useful up to a certain point, but I believe there always needs to be some future use for it.”

In February 2019, Stokes-Walters began working as a research support officer with Action Against Hunger-USA. In this role, he’ll help develop new research proposals and opportunities and help design new strategies and priorities for identifying drivers of undernutrition.

“It’s right up my alley in terms of the type of operational and programmatic research I want to be involved in!” he says.

As it turns out, Stokes-Walters—with his drive, research focus and international experience working in program development in West Africa—was absolutely Hopkins material.