World Contraception Day: A Celebration of Family Planning at the Bloomberg School 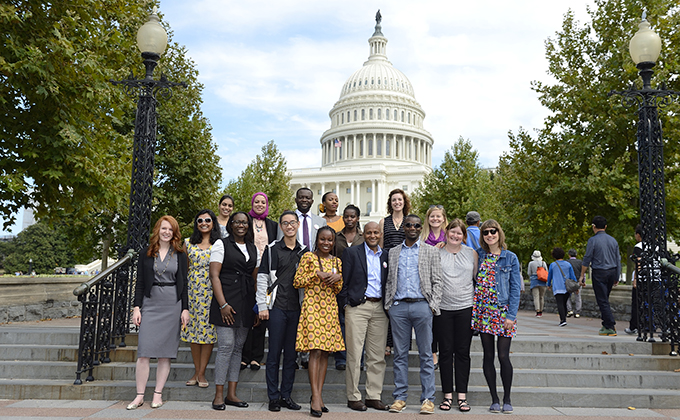 Some of the 120 Under 40 leaders gathered in Washington, D.C. on September 21 for discussion, sight-seeing, and a session at Family Planning 2020.

World Contraception Day (WCD) is an annual global campaign held on September 26. Organizations and individuals all over the world, from Africa to the U.S. to Europe, hold WCD events (both in-person and virtual) on this day. The vision of WCD is to ensure a world in which every pregnancy is wanted, and focuses specifically on young people around the globe. From your-life: “Launched in 2007, WCD’s mission is to improve awareness of contraception and to enable young people to make informed choices on their sexual and reproductive health.”

Last week, the Bloomberg School hosted a small representative group of winners named as 120 Under 40 in Family Planning global leadership. Leaders traveled to the U.S. from all over the world for five days of workshops, meetings and celebrations. Highlights included a lecture at the Bloomberg School by former Sen. Barbara Mikulski (photo below), a trip to Washington D.C. for workshops and celebrations, and a private lunch in New York City with Population Council President Julia Bunting followed by a panel discussion and a reception and awards ceremony which can be viewed here. 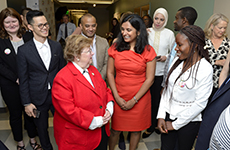 “120 Under 40 recognizes and galvanizes the accomplished and inspiring young people under 40 who are making a difference in family planning and reproductive health worldwide. 120 Under 40 shines a light on the 'positive disruptions' made by young leaders in family planning, enabling others to model their behaviors and build on their success. The project’s international profile increases awareness of family planning as critical to young people’s health and wellbeing and essential to sustainable global development.” - 120 Under 40

This event is hosted by the Bill & Melinda Gates Institute for Population and Reproductive Health and 120 Under 40: The New Generation of Family Planning Leaders, with the Anna Baetjer Society.

WHERE: Wolfe Street Building Gallery (under the Wall of Wonder)