The Importance of Mentoring 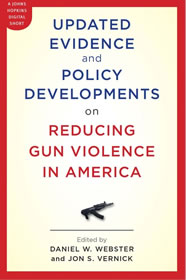 Opportunities abound for students at the Bloomberg School. Case in point: Emma Beth McGinty, PhD, a new assistant professor in Health Policy and Management, is a 2013 grad who just last year contributed to the original edition of Reducing Gun Violence in America, Informing Policy with Evidence and Analysis.

As a student, she was first author of a study that comprises Chapter 19—“Public Opinion on Proposals to Strengthen U.S. Gun Laws: Findings from a 2013 Survey.” Among her coauthors were Bloomberg School faculty mentors Daniel Webster and Colleen Barry. The team’s study appears again in the newly released 2014 publication, Updated Evidence and Policy Developments on Reducing Gun Violence in America.

“In the original chapter, we report that the majority of Americans, including gun owners and Republicans, support strengthening many gun policies,” McGinty says. “In the new update to the chapter, we provide a brief analysis of why high levels of public support failed to translate into new federal gun laws.  We conclude that moving forward, it will be critically important to better engage the majority of gun owners who support strengthening gun laws in the political process.”

McGinty credits Barry and Webster with giving her an opportunity to play an integral part in fielding a national public opinion survey about gun policy in the weeks following the Sandy Hook shooting.

“The opportunity to take on a leadership role in timely, policy-relevant work related to gun violence prevention was one of the highlights of my doctoral studies,” she says, adding that she’s thrilled about the continued collaboration with experts affiliated with the Johns Hopkins Center for Gun Policy and Research.

Former student (now faculty) Emma Beth McGinty and her mentor (now colleague) Colleen Barry discuss research and mentoring at the Bloomberg School in the context of the January 2013 Summit on Reducing Gun Violence in America.