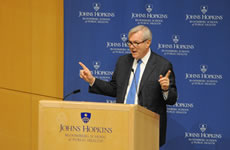 Panel Discusses Current and Future Responses to the West-African Outbreak

Osterholm, PhD, MPH, McKnight Presidential Endowed Chair in Public Health and Director, Center for Infectious Disease Research and Policy (CIDRAP), University of Minnesota, is one of the leading public spokesmen on the Ebola epidemic, which simmered for most of this year before coming to a boil in the past six weeks.

Although he has reviewed hundreds of published papers on Ebola and briefs top government officials on the epidemic’s spread, he readily admits that he knows less today about the Ebola virus than he did nine months ago.

“Let’s acknowledge we’re making this up as we go and we have to become more comfortable with uncertainty,” said Osterholm, keynote speaker at the Dean’s Symposium on Ebola: Crisis, Context and Response.

In addition to Osterholm’s keynote, five presentations and a multidisciplinary panel of discussants capped off a forum that addressed everything from a lack of coordination and leadership at the global level to an overview of experimental medical counter measures for Ebola, to gut-wrenching ethical decisions that need grappling with in real-time.

Speakers acknowledged severe shortages in the affected countries of trained healthcare workers and supplies like gloves and masks because of a frustrating lack of logistical support, but also held out glimmers of hope.

Characterized as a “fairly simple virus,” and a “very unforgiving disease” that was discovered in 1976 in central Africa, Ebola emerged relatively recently in West Africa, and has moved for the first time ever from remote areas into urban centers.  (Deforestation—a huge issue on the African continent—can be implicated in this phenomenon, according to Joshua Epstein, PhD, professor, Emergency Medicine, Johns Hopkins School of Medicine.)

There are lots of “firsts” associated with this current outbreak; among them: a first-time ever declared “public health” disaster that poses not only a humanitarian crisis, but also a terrorism threat and threat to economies on the brink. The U.S. Department of Defense is increasingly involved, with 4,000 troops committed to help build 17 100-bed treatment units in Liberia.

At this stage in the devastating epidemic, which has killed more than 4,300 in West Africa, Osterholm said that the Ebola virus has the upper hand and the global health community is playing catch up.

“The virus is operating on virus time and the rest of us are operating on bureaucracy and program time, and the virus is winning hands down,” Osterholm told an audience of 350 in Sommer Hall and more than 6,400 unique viewers who tuned in to the live webcast.

A key factor in the information deficit surrounding Ebola, said Osterholm, is the infrequency of outbreaks—only 24 between 1976 and 2013. Given the scarcity of knowledge on prevention, treatment and management of the disease, Osterholm worries that in some cases public health officials and scientists convey the impression that we know how the virus operates.

As the Ebola crisis continues to unfold, Osterholm sees “lots of unexpecteds ahead of us.” But he is convinced that a vaccine is the only hope of containing the outbreak.

However, he characterizes the U.S. investment in vaccine research as “a drop in the bucket. There’s a big disconnect between the work to get us there and getting it into somebody in Africa,” Osterholm said.

“We need to deal with everything at the same time—research and development, measuring effectiveness, how to get it to Africa,” he said. “We need to imagine that tomorrow Kinshasa could be on fire.

“The Ebola outbreak is WHO’s 9-11,” Osterholm declared, asking if WHO is outdated and emphasizing how important this time is for reconsidering “global health” and how we respond to global health crises.

Important as the worldview may be, control depends upon a community-based- containment-and-care strategy, according to David Peters, MD, Chair, International Health, JHSPH. He cited lessons learned from the DRC, and from the Congolese who he characterized as “calm in the face of the storm” and community-centered.  He referred to Lofa County, describing the success of community care center programs that capitalized on local, innovative ways to improve hygiene.  When fighting this emerging epidemic, which he described as “in the exponential part of the curve,” he suggested looking at local leadership and community-level resources.

Trish Perl, MD, MSc, professor, Medicine, Johns Hopkins School of Medicine, and senior epidemiologist, Johns Hopkins Health System, also holds out hope, but only if the conversation can be steered from being all about isolation.

She maintains that there are relatively simple things that can be taken into the field, now, to decrease mortality. The data are strongest in terms of providing aggressive IV hydration, she said.  Replace electrolytes, and manage nausea and fever, she said:   These are relatively inexpensive measures that can be part of the bundle of care. Add to that improved palliation of people who are dying.

“We are talking about failures of infection control,” Perl said.  “This is not sexy. It’s like learning to drive.  How can we learn how to drive down this road a little better?”

Joshua Epstein said he thinks the CDC’s worst-case scenario can be avoided; that the high peak won’t be as severe as predicted, but also that Ebola won’t vanish.

He proposed an innovative human recycling strategy called Mobilization of Recovereds.  As far as anyone knows, he said, people who survive the disease are immune to it, so why not convert survivors into a healthcare workforce?

It’s a strategy that may depress spread.  But Ebola is here to stay, it seems.

“This is a test,” said Joshua Sharfstein, MD, Maryland’s Secretary of Health & Mental Hygiene. The test involves not just understanding this disease, but also developing therapeutics and diagnostics.  Above all, he added, it’s a test of our ability to support front line health care workers.

The half-day symposium was organized by Andrew Pekosz, PhD, an associate professor in Molecular Microbiology and Immnology, and a leading expert on the basic biology of influenza and other emerging virus infections.

As a research institution with scholarly and moral obligations, Johns Hopkins is playing the role as a crucial convener, explained University President Ronald J. Daniels, by asking questions the world is most afraid to ask, and reckoning with the answers, no matter how complex.—Jackie Powder and Maryalice Yakutchik