Boots on the Ground 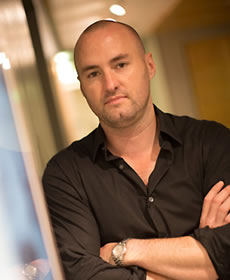 When the Red Cross asked for help conducting Ebola-related research in Guinea, Bloomberg School doctoral students Tim Roberton and Clementine Fu immediately stepped forward. From July 19 to August 1, the two worked in the outbreak’s initial epicenter in Guéckédou, and in the capital city of Conakry.

“Working on an Ebola outbreak like this is such a rare and exciting opportunity,” said Roberton, a fourth-year doctoral student. Hired as consultants by the International Federation of Red Cross and Red Crescent Societies (IFRC), the two assessed that organization’s response to the crisis in real-time.

The pair conducted in-depth interviews with Red Cross volunteers and local community members. Qualitative research methods they learned in the classroom were central to their fieldwork in capturing information that may otherwise have been lost in the midst of all the activity.

Through IFRC’s partnership with the Center for Refugee and Disaster Response, Professor Gilbert Burnham, MD, PhD, organized the trip and empowered the students to head this timely and crucial project.

With Roberton’s background in international health and health systems, and Fu’s expertise in epidemiology, the team worked with IFRC staff on the ground to evaluate various aspects of the response, such as social mobilization, contact tracing and dead body management.

“Despite all the global attention this outbreak is receiving, the key to containing the disease is working with volunteers in the community to help local people understand Ebola, and how they themselves can stop its spread,” says Roberton.

Now back in the U.S., Roberton and Fu are analyzing their data to compose a scientific report for the IRFC by month’s end.

Since entering the DrPH program in International Health in 2011, Roberton, a native Australian, has worked in Burkina Faso and Jordan. It’s been “a great program,” he says, “not only to build my knowledge and skills, but also to have opportunities exactly like this, to go and work in the field.”

The Center for Refugee and Disaster Response