A Promise to His City 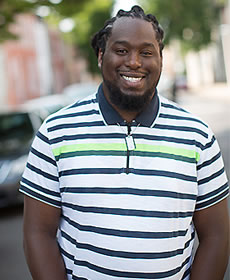 When he enrolled at the Bloomberg School last year in Department of Mental Health, Fakunle began to see his childhood neighborhood from a different perspective—literally. Gazing out wall of windows in the School’s ninth-floor cafeteria, he glimpsed his future.

“I could see where I lived, the hospital where I was born. I just looked around and I told myself, I’m going to try and save this city, or I’m going to die trying,” said Fakunle. “That’s how much this city means to me; it deserves my best.”

The 2009 graduate of the University of Maryland took a somewhat circuitous route to the Bloomberg School. After earning a BA in Psychology, and Criminology and Criminal Justice, Fakunle worked as a research analyst at a consulting firm, then as a social insurance specialist for three years with the federal government.

Although uncertain of his next step, he knew that he wanted to get involved in doing research that ultimately would effect positive change in his city.

“I wanted to focus on the criminological aspect of society, specifically why people may eventually “graduate” to criminal behavior,” Fakunle said. “Before it becomes criminal, it’s maladaptive. It doesn’t hit the legal system, but it’s a red flag and it’s not good.”

A colleague suggested that he talk to Deborah Furr-Holden, PhD, associate professor in Mental Health. After one meeting, he knew that public health was his calling.

“She gave me the answer,” Fakunle said.

With Furr Holden as his adviser, he’s focusing on environmental, social, and psychological risk factors that can lead urban youth to criminal behavior.

“It’s a personal goal to make sure that my research can be applied,” he said. “The people who need it most are the people here. That’s why I stayed.”