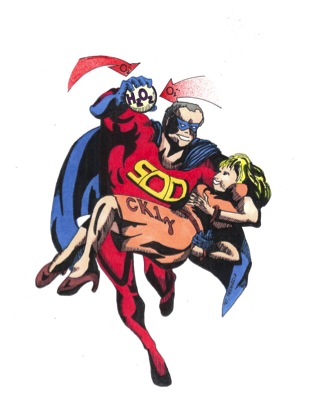 Just like a comic book super hero, the enzyme known as SOD1 (superoxide dismutase) maintains a secret identity. Since its discovery in 1969, scientists believed SOD1’s only role was to protect living cells against damage from free radicals. Now, researchers at the Johns Hopkins Bloomberg School of Public Health have discovered that SOD1 protects cells by regulating cell energy and metabolism.

Transforming oxygen to energy for growth is key to life for all living cells. That process happens either through respiration or fermentation. When oxygen is plentiful, respiration normally takes over; however certain cells fail to respire in spite of abundant oxygen and instead ferment, leading to uncontrolled cell growth—a hallmark of cancer.

“I’ve been telling my students to think of SOD1 as a superhero. It not only defends cells from damaging free radicals, but also has a secret life as a guardian of cell energy and metabolism,” said Valeria Culotta, PhD, professor in the Bloomberg School’s Department of Biochemistry and Molecular Biology.

Using the baker’s yeast S. cerevisiae as well as a human cell line, Culotta, working with Amit Reddi, a post doctoral fellow in Biochemistry and Molecular Biology, determined that SOD1 transmits signals from oxygen and glucose to repress respiration. This signaling is accomplished through SOD1 protection of another enzyme known as casein kinase 1-gamma (CK1γ), which is an important key to the switch between respiration and fermentation.

“Our findings provide new clues as to how rapidly dividing cells—from yeast to human cancers—may escape the urge to respire and instead choose fermentation to promote rapid growth,” said Culotta.

The results of their research were published January 17, 2013, in the journal Cell.