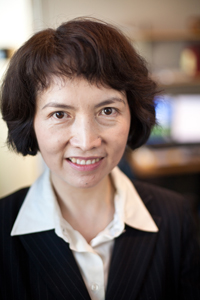 Xiaobin Wang, MD, ScD, MPH, director of the new Center on the Childhood Origins of Disease at the Bloomberg School of Public Health, was installed Wednesday, March 21, as the Zanvyl Krieger Professor in Children’s Health.

Speaking on Wang’s behalf at the event and formally introducing her was Bernard Guyer MD, PhD, the inaugural Zanvyl Krieger Professor, who became Wang’s advisor in 1989 when she was a doctoral student and whom she acknowledges as a “lifetime mentor.”

“I don’t take any credit for her accomplishments,” Guyer said, beaming at his former student and current colleague, “but I take great pride in them.”

A board-certified pediatrician and molecular epidemiologist in the Department of Population, Family and Reproductive Health, Wang has led dozens of large-scale molecular and environmental epidemiological studies on reproductive health, preterm birth, food allergies, obesity and precursors of pediatric and adult diseases. She has authored and co-authored more than 130 publications, including articles in the New England Journal of Medicine, Lancet, and JAMA.

JAMA Editor-in-chief Howard Bauchner, MD, a former colleague of Wang’s at the Boston Medical Center, was one of nine featured speakers at an afternoon-long symposium on The Future of Child Health that preceded the ceremony.

Oxiris Barbot, MD, commissioner of health for Baltimore City; Joshua M. Sharfstein, MD, secretary of the Maryland Department of Health and Mental Hygiene; and Michael Lu, associate administrator of the Maternal and Child Health Bureau within the U.S. Department of Health and Human Services, talked about the challenges of making life better for children  from local, state and federal points-of-view.

In addition, Joseph Brain, PhD, of the Harvard School of Public Health and Barry Zuckerman, MD, of the Boston University School of Public Health; joined a Johns Hopkins contingent represented by Robert Blum, MD, PhD, MPH; Peter van Dyck, MD, MPH; and George Dover, MD, in offering insights about the future of child health and acknowledging Wang’s prominent role in this field.“I have accepted a great honor and huge responsibility,” Wang said, thanking the Krieger family and representatives of the Zanvyl and Isabelle Krieger Fund.

Describing Johns Hopkins as an “ideal setting for interdisciplinary research and synergistic partnerships at the national and international levels,” Wang said, “Together, we can save lives, millions at a time.”    —By Maryalice Yakutchik