Two and a half months ago, the 2011 International Conference on Family Planning drew more than 2,000 participants from 87 countries to Dakar, Senegal. It was four fast-paced days of discussions, presentations and workshops, from family planning outreach and mobile technology to the latest research on contraception and HIV risk to the economic benefits of family planning.

On February 10, the Bloomberg School’s Department of Population, Family and Reproductive Health (PFRH) hosted “Reflections,” a forum at which several Conference attendees—mainly from the School—recalled a gathering characterized by optimism, intensity and passion. The panelists said they left the conference energized by a collective renewed commitment to international family planning, a dedication that veterans in the field said they have not seen in more than 30 years.

“What surprised me was not the content of the sessions but the extraordinary response to issues of family planning,” said Robert Blum, MD, PhD, MPH, William H. Gates Sr. Professor and Chair of the Department of Population, Family and Reproductive Health. He noted that the Conference drew first ladies, ministers of health, planning and finance from several African nations, researchers and policymakers.

“When you see 2,200 people whose work is focused around this issue, it’s nothing short of stunning,” Blum said.  “When you see multiple generations who were there, you say this field has a future.”

Speakers said that the 2009 International Family Planning Conference in Kampala, Uganda, was a key contributor to a building momentum in international family planning, and two years later the issue is gaining traction, as evidenced by the larger 2011 Conference group convening in Francophone West Africa, one of the most neglected regions of the world in terms of family planning and maternal health.

“It’s an indication that things are changing in a dramatic way,” said Duff Gillespie, PhD, a PFRH professor and senior scholar with the Bill and Melinda Gates Institute for Population and Reproductive Health at the Bloomberg School. The Gates Institute and Senegal’s Ministry of Public Health and Prevention co-hosted the Conference. 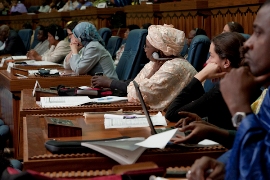 Blum said that a Conference highlight was a presentation by Chelsea Polis, PhD, an epidemiologist with USAID’s Office of Population and Reproductive Health. Her discussion focused on the recent controversy surrounding the body of epidemiological evidence examining potential relationships between hormonal contraception and various HIV-related risks.

At the panel discussion, Polis, who received her doctorate from the Bloomberg School in 2009 and completed a postdoctoral fellowship in 2011, said that she recently worked with the WHO and the CDC on systematic reviews of the research, which shows conflicting evidence on whether or not hormonal contraception heightens HIV-related risks for women. WHO, which issued a statement on February 16 that women can safely continue using hormonal contraceptives, relied, in part, on the analysis in its review of contraceptive guidelines for women at risk of HIV and women living with HIV. The agency also advised women and their partners to use condoms to prevent HIV transmission.

Gillespie focused his discussion on the “demographic dividend,” a concept that was highlighted at a high-level meeting held in conjunction with the Conference and attended by more than 200 leaders from government, academia and the donor community.

He said that many developing countries have a “youth bulge” with a huge percent of their population under 15 years of age. The demographic dividend occurs when this youth bulge ages and becomes economically productive. If the birth rate falls, there will be fewer people in the youngest age group requiring support from the economically productive segment of society. This shift creates an opportunity for economic and human development in a country as more resources become available.

“This gives the people with power a rationale for investing in family planning that goes beyond health,” said Gillespie. “It includes health, but goes to the heart of social and economic development.”

Laurie Zabin, PhD, a PFRH professor emerita and the Gates Institute founding director, declared the conference to be “wondrous.”

Zabin, a pioneer in family planning and reproductive health, also pointed out that the recent controversies in the U.S. around birth control (including the Susan J. Komen Foundation’s withdrawal of grants to Planned Parenthood clinics and its reversal of the decision) demonstrate that the issue still polarizes—and not just in the developing world.

“My final hope is that someday people will have the realization that the most important decision people will ever make in their lives is the decision to bring a new life into the world,” Zabin said. “That’s a concept we haven’t gotten across yet.”