He was 17 and had come to Johns Hopkins’ Harriet Lane Clinic for a routine physical.

The pediatric resident who took the young man’s medical history asked him if he was a father or had ever gotten somebody pregnant. The teen said his girlfriend was due to have a baby in a 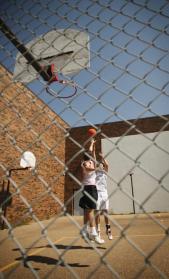 “We congratulated him, reviewed with him his needs and any concerns but made sure that we discussed his reproductive life plan and, based on this, provided him and his partner with appropriate family planning services,” recalled Arik Marcell, MD, MPH, assistant professor with the Bloomberg School’s Center for Adolescent Health and a teen health expert with the Hopkins Children’s Center, who was supervising the clinic visit.

When it comes to male teens, this type of doctor-patient interaction is hardly typical. Far too often, said Marcell, medical providers fail to initiate discussions about sexual and reproductive health with adolescent males, a subject that care providers frequently raise with teen girls.

Had the doctor not asked his 17-year-old patient about fatherhood and pregnancy, he would not have known about the imminent and transformative event facing this young father-to-be.

“They’re not routine questions for boys, and I don’t see why they shouldn’t be,” said Marcell, whose recent lecture on the topic at the School was entitled “Sexual and Reproductive Health Care: What About the Young Male?”

“It’s really on us to bring these topics up as part of our work with young men in clinical settings,” he said.

Marcell pointed to gaps in research, the absence of uniform clinical practice guidelines and care providers’ lack of knowledge as contributing factors to a health care environment in which male teens often don’t receive basic sexual and reproductive health care—services that he said should be standard in primary care settings. These include taking a sexual history, STI/HIV screening and testing, a sexual development physical assessment, including a genital exam, and discussion of the male role in contraception and STI/HIV prevention.

“I think the bottom line is there’s a major research gap,” said Marcell.

“We have little data about sexual and reproductive health services delivered to boys and young men, and the few studies that we have show gender disparities, with fewer services being provided to males,” he said, noting that the imbalance reflects the longstanding traditional emphasis on women’s health in the family planning and sexual and reproductive health arena.
Yet research shows that it’s vital to reach this population.

Studies have found that compared to teen girls male adolescents become sexually active at a younger age and engage in high-risk sexual behaviors more often, including unprotected sex and sex while drunk or on drugs.

And in a 2010 study in the Journal of Adolescent Health, based on data from the 2002 National Survey of Adolescent Males, Marcell found that fewer than 1 in 5 young men reported receiving STI/HIV counseling, a finding that indicates no improvement over a 7-year period.

“Those are substantial missed opportunities for delivering services,” he said.

“It’s piecemeal,” he said. “We don’t have the kinds of curricula built around men’s health that we do around women’s health.”

Although care guidelines and recommendations exist in this field—issued by various agencies and professional organizations—there is no single entity that focuses exclusively on men’s health care.

“Organizations like ACOG [American Congress of Obstetrics and Gynecology] focus on services for adult and younger women,” said Marcell. “Without such an organized approach we’re lagging behind in service recommendations for males.”

He’s working to bring some clarity to this area.

Marcell is the lead author of a December 2011 report in Pediatrics that, for the first time on a national level, he says, articulates clinical practice guidelines for sexual/reproductive health care for male adolescents.

As director of the Johns Hopkins Harriet Lane Clinic’s national Title X Family Planning Program, which funds family planning services in clinics across the country, he is the lead author of a white paper to be released this summer on sexual and reproductive health care recommendations for men across the lifespan, from the teens through the adult years.

However, Marcell noted, “Guidelines alone don’t change clinical practice. Changing social norms will also be necessary,” he says “Male teens have substantial sexual/reproductive health care needs in their own right. We need to find ways to help them understand what these needs are and how health care services can be beneficial.” —  Jackie Powder