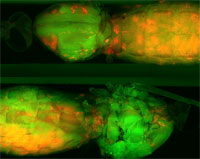 Wolbachia are bacteria that infect many insects, including mosquitoes. However, Wolbachia do not naturally infect Anopheles mosquitoes, which are the type that spreads malaria to humans. Researchers at the Johns Hopkins Bloomberg School of Public Health found that artificial infection with different Wolbachia strains can significantly reduce levels of the human malaria parasite, Plasmodium falciparum, in the mosquito, Anopheles gambiae. The investigators also determined that one of the Wolbachia strains rapidly killed the mosquito after it fed on blood. According to the researchers, Wolbachia could potentially be used as part of a strategy to control malaria if stable infections can be established in Anopheles. Their study is published in the May 19 edition PLoS Pathogens.

“This is the first time anyone has shown that Wolbachia infections can reduce levels of the human malaria parasite (Plasmodium falciparum) in Anopheles mosquitoes,” said Jason Rasgon, PhD, senior author of the study and associate professor with the Johns Hopkins Malaria Research Institute and the Bloomberg School’sW. Harry Feinstone Department of Molecular Microbiology and Immunology.
For the study, Rasgon and his colleagues infected Anopheles gambiae mosquitoes with two different Wolbachia strains (wMelPop and wAlbB). After infection, Wolbachia disseminated widely in the mosquitoes and infected diverse tissues and organs. Wolbachia also seemed to actively manipulate the mosquito’s immune system to facilitate its own replication. Both Wolbachia strains were able to significantly inhibit malaria parasite levels in the mosquito gut. Although not virulent in sugar-fed mosquitoes, the wMelPop strain killed most mosquitoes within a day after the mosquito was blood-fed.

“These experiments show that Wolbachia could be used in multiple ways to control malaria, perhaps by blocking transmission or by killing infected mosquitoes,” said Rasgon.

Worldwide, malaria afflicts more than 225 million people. Each year, the disease kills nearly 800,000, many of whom are children living in Africa.

In addition to Rasgon, the authors of “Wolbachia infections are virulent and inhabit the human malaria parasite Plasmodium falciparum in Anopheles gambiae” include Grant Hughes and Ping Xue of the Johns Hopkins Malaria Research Institute, and Ryuichi Koga and Takema Fukatsu of the National Institute of Advanced Industrial Science and Technology in Tsukuba, Japan.

Funding was provided by the Johns Hopkins Malaria Research Institute and the National Institute of Allergy and Infectious Diseases.